Wabbit Wampage is the name of a board game and associated comic book, which feature anthropomorphic rabbits. The board game spawned a sequel game, Wabbit's Wevenge. 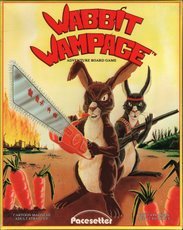 Wabbit Wampage was created by Pacesetter Ltd in 1985.[1] In the game, one player is Farmer Brown, while the others play Wabbits. All players battle for points by performing different tasks throughout the year: plowing fields in Spring, stockpiling carrots in Summer, whomping enemies in Autumn, and destroying buildings in Winter. Players can mail away (represented in the game by a deck of cards) for items to help them in squashing the other players.[1]

Wabbit Wampage was followed by Wabbit's Wevenge in 1986.[3] In the sequel game, Wambo Wabbit seeks to avenge the helpless (and hideless) bunnies trapped at Mayor McGreedy's Fur Factory. Players take the roles of Wambo, or any of several vicious critters who wish to turn Wambo's kin into fur coats and profits; the Mayor himself, Bernie the Dog, or Randy Andy the Dump Cat.[3]

In 1987, Amazing Comics published a one-shot comic book based on Wabbit Wampage.[4] Also called Wabbit Wampage, it was written and drawn by Pacesetter Ltd's Stephen Sullivan.