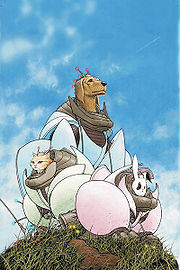 Cover to the WE3 trade paperback. Art by Frank Quitely.

WE3 is a three issue comic book miniseries by writer Grant Morrison and artist Frank Quitely, who describe its kinetic style as "Western Manga". It was published in late 2004 by DC Comics' imprint Vertigo.

It follows the journey of WE3, three prototype "Animal Weapons" - a dog, a cat and a rabbit encased in robotic armor and given the ability to talk through the use of prosthetics - as they break free of their human masters and try to find their way "home". The US Military attempts to capture them before anyone can find out about the Animal Weapons program and so WE3 are pursued by troops, helicopter gunships, and other prototype Animal Weapons.

New Line Cinema is in the process of signing WE3 as a movie project. Morrison is in negotiations to write the script, while Don Murphy, Susan Montford, and Rick Benattar are attached as producers. According to the trade, if the film goes forward, the cybernetic animals would be completely computer-generated.