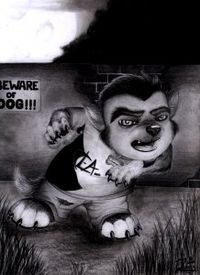 "As the wolfboy prowls" - an example of W0lfB0y's artwork.

W0lfB0y (Jordan Lorenz) is a furry and transformation artist.

Being almost obsessed with werewolves since he was a child, W0lfB0y found artwork to be a perfect way to express his interest in them. Curious to if there were other people or artists who had a love of werewolves in transformation, he browsed the internet, first stumbling upon sites like Temple of Luna and Werewolves in Suburbia as a teenager.

Realizing there was a place for artwork like his, W0lfB0y eventually put up his artwork on VCL, and a transformation site called Werecreatures.

As of August, 2008, W0lfB0y resides in San Antonio, Texas, U.S.A, living in a home with two other furs who hold a popular furmeet every couple of weeks. In his free time, he loves good racing games, spending time hanging out with fellow gearheads, basketball, going to car meets, and browsing artwork on various art sites.

After W0lfB0y first appeared on VCL in 2001, under the name Wolfish1, he popped up on various art sites under different names: J-Wolf on Transfur, WolfBoy-J on deviantART, and Jordan Lorenz on ArtWanted.com.

W0lfB0y favors creating realistic transformation art. He works mainly with pencils, making him a strictly traditional artist. Due to his lack of knowledge regarding computer-aided art, he sometimes leans on other artists to color his pencil drawings.

Often being his own worst critic, W0lfB0y tends to find himself in long artistic dry spells, thinking his artwork isn't good enough, and thus becoming more of a art watcher rather an artist for the past couple of years. Although he has never drawn a true representation of his personal character, he describes his character as a grey wolf-breed werewolf. His "W0lfB0y" character that he draws on occasion is meant to be a loose interpretation of himself as a child.