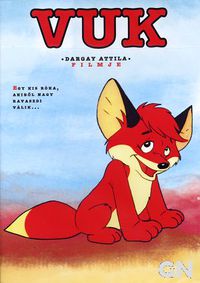 Vuk is a 1981 Hungarian animated film, based on the 1965 novel Vuk by István Fekete. It was marketed in English-language countries as Vuk: The Little fox. Directed by Attila Dargay, it features the voices of Judit Pogány as young Vuk, József Gyabronka as adult Vuk, László Csákányi as Karak, and Tibor Bitskey as the narrator. The music is by Peter Wolf.

A computer-animated sequel, Little Vuk, was released in 2008, and was widely panned by critics.

The film is about a fox cub, Vuk, who ventures away from his family's den and, upon his return, learns from his uncle Karak that his entire family has been shot and killed by a human hunter. Karak then offers for Vuk to stay with him, and Karak continues to raise him.

As Vuk grows older, he develops much cunning and cleverness. Now a young adult fox, he finds a vixen held captive in a cage on a human farm. He tricks the guard dogs and other animals, as well as the hunter himself, and eventually helps the vixen escape. She joins Vuk and Karak in the woods.

Karak is killed by humans during a hunt. Vuk swears revenge on the hunter and finally accomplishes it, playing many jokes on the hunter's stupid dogs and eventually on the man himself. At the end of the film, Vuk and his wife have cubs.