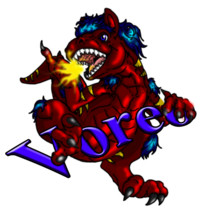 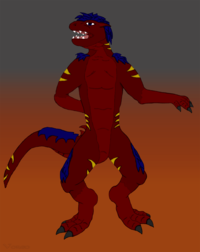 Voreo Sabrae is an avid gamer, playing such titles as World of Warcraft and Guild Wars 2, on such platforms as Xbox LIVE and Steam), among others.

Voreo Sabrae's fandom name has to do more with the Oreo's sandwich cookie than the paraphilia Vorarephilia,[clarify] although it does work around both concepts.[clarify]

The full name, however, originated from a Sangheili name generator; his Sangheili name was originally Voro'Tyukee, but was changed to the current one by tweaking it with part of his Second Life name.[clarify] This final name is also is fursona's handle.

He does not like to be instantly looked down at as a bad guy just because his name has "Vore" in it.

His color scheme is similar to WoW's Nether Drake in terms of red colors and placement of some of the yellow stripes. The blue hair comes from being part Fluff Dragon.[clarify] Overall, he is part Nether drake, Western and Fluff dragon.

His silly state of mind comes from being part Fluff.[clarify]