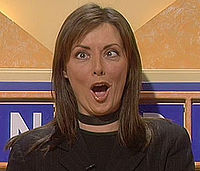 Carol Vorderman. What the craze was all about. Note the 'Shocked' expression, if she only knew.

Vorderman was a craze which swept Eurofurence 13. It was inspired by the person of Carol Vorderman, who was a TV show co-presenter in the UK. She had presented an intelligence-based show Countdown, where contestants have to do various tasks such as find words out of letters and do mathematics on the fly.

Starting late during the convention it formed a small, yet memorable part of the proceedings of EF13. The initial phrase was created with 3 furs from the UK, Pinky Raccoon, Nathea and Foxxtail who spent 15 hours at Frankfurt Airport on their way to Eurofurence during tired mumblings and squabbles. It was set off when signs bearing the following began to appear around the convention, on floors one and three of the hotel, above the doors leading into the lifts, and on the notice boards:

At first people ignored them, but roughly an hour after the first sign appeared, an unknown fur began to scream the word "Vorderman" at the top of his voice. Soon, other furs around the con had begun chanting the word "Vorderman". A number of prominent members of Eurofurence, including Cheetah, Uncle Kage, Kage's parents and 2, The Ranting Gryphon then joined in on the act. The pinnacle of crowd activity was when the entire dance floor yelled "Vorderman" at the tops of their voice when the track finished.

In the short time the "Vordermans" were around the convention, they quickly developed their own form of greeting to others who were in on the joke. Most commonly, screaming the word "Vorderman" at any moment would be followed by a sizeable proportion of the people in the room calling out in return. A common gesture was to hold one's elbow up to another attend, with the fist facing oneself, then touching the elbows together to form a V and calling out "Vorderman".