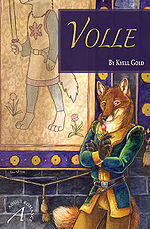 Volle is a homoerotic fantasy novel by Kyell Gold, published by Sofawolf Press in January 2005, with cover and interior illustrations by Sara Palmer.

The story follows the adventures of the fox Volle as he changes from a hedonistic young student at the Academy, where he is a spy-in-training who frequently visits the pubs of the local towns for alliances with other young males, to a long-term covert operative in the central court of a rival nation.

While the book contains scenes of homoerotica, the main focus is on inter-character romance and on the intrigue and politics of the court. The story features an eucumenical, polytheistic or pantheistic religion and shows the varying importance of this faith to the book's characters. The book also explores the ways in which the different nations of Argaea integrate or segregate the different species that inhabit the world, although its sequel, Pendant of Fortune, places more emphasis on this theme.

Volle was awarded the 2005 Ursa Major Award for Best Anthropomorphic Novel, and was followed by Pendant of Fortune in 2006 and the anthology Prisoner's Release and Other Stories in 2007.

In a note at the beginning of the novel, Gold states that Volle's name is pronounced to rhyme with "wall", not "holy" or "whole".

Book 1: The Palace of Divalia

Volle, a red fox from the country of Ferrenis, is pulled from a near-encounter at a brothel by Seir, a mouse whom we went to the Academy with. Seir takes Volle and Reese, a rabbit, to a meeting with Duke Avery, a wolf, and the Prince of Ferrenis, Gennic. Duke prepares the group to uncover a plot by the enemy kingdom, Tephos, against their country. Part of the plan involves Volle taking on the identity of Lord Vinton, a nobleman. The group sets off on the long carriage ride to Tephos. While staying at a pub the first night, Seir warns Volle not to engage in his sexual conquests. As they near the border to Tephos, Volle has to dye his fur black to get past in order to cover their tracks. While doing so, Reese tells him that Tephos is Orthodoxal and frowns upon gay sex. This, of course, upsets Volle. Once they cross the border to another pub for the night, Volle masturbates to keep his sexual desires at bay.

The group arrives in Divalia and they manage to get into the palace, with Volle successfully taking the role of Lord Vinton. Once there, he meets Alister (a martin), the Steward, and Arrin (a red fox), a secretary. Alister reminds Volle of a tax all lords pay while living in the palace and reminds him to see the Exchequer later on. Volle is shown his room and is left to his devices. Volle meets the Exchequer, Minister Ullick (a squirrel), who tells him that he has 20 years of back taxes on the Vinton property. To start paying off his debt, Volle provides oral sex to Ullick. Later on, Volle attends a dinner with the rest of the palace. He meets the King and Queen and Lord Tistunish (a wolf), who gladly takes Volle under his wing. Afterwards, Tistunish takes Volle to see the Ermine Dancers, who turn out to be erotic dancers. When the show is over, Volle meets Helfer Ikling (a weasel), another lord in the palace that doesn't take his title seriously. Helfer takes Volle to a brothel outside the palace walls and tells him that the Church isn't as Orthodoxal as he was told. Volle meets one of the workers, Richy (a wolf), and pays to have sex with him.

The next morning, Volle gets an assistant, Welcis (a skunk) who helps him keep track of his schedule around the palace. Volle meets Secretary Prewitt (a bear), who asks him about his background. After an afternoon run with Helfer, Volle meets Dereath Talison (a rat). Dereath expresses interest in Volle and invites him to a private dinner, but his demeanor makes him uncomfortable. Tishtunish pays a visit to Volle, where he tells him that he'll eventually have to marry and have cubs. Tish then talks about an old war between Ferrenis and Tephos where an old king -- Bucher, who was a red fox -- raised an army and went to war, but the Ferrenians completely slaughtered his army and took some of his land, causing his people to turn against him. Tishtunish then hints that some people in Tephos want a war against Ferrenis to gain that land -- the Reysfields -- back. Later that night, Volle has dinner with Helfer, who reveals that Dereath has stalked him in the past. He also tells Volle not to worry about marrying a vixen since she wouldn't be his first priority. After their dinner, Volle finds a tax form in a book Helfer gave him, which he returns to his assistant Caresh (a fox).

The next day, Volle goes on his dinner date with Arrin. Arrin expresses interest in Volle, but insists on taking things slow, which Volle isn't used to, but he agrees to it. Volle’s dinner with Dereath and a couple other lords goes well until Dereath gets drunk and tries to force himself on Volle. Volle spends the next day attending a tribunal, a church session, and calling Ullik out on lying about his debt in order to relieve his sexual desires. After another run with Helfer, Dereath demands an apology from Volle about the previous night, but Volle refuses. Volle returns to the Jackal's Staff and hooks up with Jonas the cougar, whom Volle fantasizes is Gennic. Later, he attends a dinner hosted by Tishtunish, where he meets a vixen named Ilyana. At the end of the night, Ilyana tells Volle that she's only interested in having cubs not romance. This makes Volle feel better about having a spouse, and he agrees to sponsor a cotillion for her.

As Volle becomes accustomed to a routine around the palace, he secretly meets with Reese and Seir at the Jackal's Staff, where he says he doesn't have much information to share. His friends think he's not taking his role seriously. After the meeting ends, Richy joins Volle and the two have sex.

Volle meets with Secretary Prewitt, who tells him to keep Xiller's presence discreet. Arrin shows Volle a complaint that Dereath filed about his actions in the garden. Volle reassures him that he still wants to pursue a relationship with him. Helfer shows Volle a passageway from his wardrobe that leads into the village. After listening to a tribunal, Lord Maron Oncit (a wolf) invites Volle to a private dinner, where he implies that a war involving Tephos is imminent. Later, when Xiller wishes to attend church, Volle organizes a private sermon with one of the priests. Xiller mentions seeing a golden bear around the grounds (which Volle realizes is Prewitt) and mentions that he must leave the next day on his own mission. The next night, Xiller says goodbye to Volle, leaving him a bag of gold coins, promising one day to come back for it.

With Xiller gone, Helfer helps Volle resume his usual activities around the palace. The next day, Volle meets Ilyana's parents where he fails to make them believe he's unfit to marry their daughter. Dereath is sent away from the palace for talking about Xiller's presence to other people in the palace. Volle meets with his team and tells them his beliefs that Prewitt and Oncit are involved in espionage against the South. Ilyana takes Volle out to get some new clothes. Afterwards, he sees Richy again, where he gives Volle advice on how to avoid mating with a vixen.

Two weeks later, Volle attends Ilyana’s cotillion, where he spots Reese in attendance. When the cotillion ends, Ilyana tries to seduce Volle, but he isn’t able to finish. On the carriage ride back to the castle, one of Volle’s teammates -- Tella -- informs him that Xiller’s dead along with Prince Gennic. Apparently, Xiller left for Ferrenis, where he assassinated the prince and was executed in return. This leaves Volle outcast from his group. He turns to the church for comfort, struggling to forgive himself.

Dereath returns to the palace, accusing Volle of being a fraud. But Volle manages to lie to secretary Prewitt about his journey to Divalia, claiming that the party picked up a black fox on the way to the mountains. Prewitt confines Volle to the castle. Volle asks Arrin to forge papers for him, but he refuses. Volle uses Helfer's secret passage to sneak out and meet with Seir. He breaks down in tears, and after a conversation in which she tells him that he'll be staying in the palace, Volle deduces that Xiller was set up because the coins in his purse were of a different currency than Ferrenian. Helfer tries to get Volle to relax by inviting Richy from the Jackal's Staff over where they have a threesome.

The next day, Volle meets with King Barris where he pleads innocence. Barris reveals that he didn't order anyone to execute Gennic. Volle attends a church service where he decides to look at his mission as one of saving his people rather than just finding information. Volle finds Ullik in the palace and offers a blowjob in exchange for a look at the monetary records. Ullik takes the offer; Volle learns that it was Secretary Prewitt who exchanged Thephosian gold for money from the southern kingdom -- Terrialis. Later, Arrin breaks up with Volle, claiming that he's “too exciting” and the two decide to remain friends. Helfer heads off to Vellenland, and Volle gives him the gold to return to Xiller's family.

Prewitt and Oncit visit Volle in his chambers where the two reveal that they sent Xiller to assassinate Gennic in a plot to slowly take over Ferrenis. Although Volle is angry with them, he agrees to join their group in hopes of stopping the plot. He tells his team this information and they decide to kill Prewitt in revenge. A week later, Volle gets drunk so he can properly mate with Ilyana. He awakens the next day with a hangover. Tish tells Volle that he is actually a Ferrenian sympathizer who had been working with his team in hopes to broker peace between Tephos and Ferrenis.