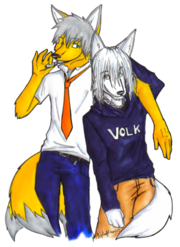 Volk (on right) pictured with his mate, Aux Chiens, drawn by Tiggstar.

The White Bandit, a gift-art piece for Volk, fancifully depicting his fursona in the style of Fire Emblem, by Sir Paul the III.

Volk (born 14th September 1989) is a white wolf (Okami) Therian from Florida. An amateur graphic artist and occasional poet, he is married to Christopher Veidt since February of 2007.

Volk's name directly originates from the Russian term for "wolf" -- Russian being one of his favourite foreign languages. Elsewhere, he is known as Zero (the English translation of the name of the character Rei from Breath of Fire) and Okami, from the Japanese mythical wolf of the same name.

In the past, Volk has done collaborations with other Furry artists, assisting with colouration and line-art, as well as composing poetry which he derives from moods, emotion, and Nature.

Volk's other main artistic outlet is in the field of abstract digital artwork, using programs such as Terragen and Cinema 4D to create hypnotic, psychedelic landscapes and visuals.

An avid gamer whose taste encompasses many genre's of video games, Volk has described himself as a big fan of both classic titles (as a retrogamer), next-gen consoles like the Nintendo Wii, Xbox360, and the older PS2. Amongst his favourite series of games are Resident Evil, Final Fantasy, .hack//G.U., and Zelda -- the most recent installment of which, Twilight Princess, struck something of a chord, as a key feature to the game involves the hero Link's ability to transform into a wolf.