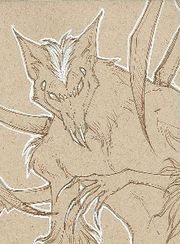 Though he does art every so often, Voice is primarily a writer in and outside of the furry fandom. Primarily a horror and erotica writer, Voice has produced a number of works which can be found at Furplanet, as well as Rabbit Valley, and continues to work on producing new and interesting work. He was the primary editor of Furplanet's 'Abandoned Places', is a member of the Furry Writers' Guild, and is a founding member of the writing podcast, Fangs and Fonts.

Lastly, he is also a moderator for the Alberta Furry Forum, and has been a guest on the local furry podcast Unfurled.

Voice's unique fursona came into being after he realized that, over the course of time, he was slowly growing away from his original fursona. After a lot of consideration, he decided to create a character that combined the three animals that he liked and felt a connection to, and name it after a character from a Necromunda story set in the Warhammer 40k universe. His appearance came about with a distinct look at creating a character that was part spider, and actually looked like it was part spider, something Voice had noticed wasn't normally the case on FA. Voice as a name was also chosen because at the time, he was heading back into writing, something he had given up in his childhood and now wanted to come back to.

Voice tends to not wear clothing as he finds it too restricting to his movements. He has eight limbs, the standard four (two legs, two arms) as well as four arachnid limbs that can be retracted into fleshy sheaths in his back. (the biology for this is just bizarre, so just go with it) He has two coat colours, a summer coat that is predominantly browns with black markings on his upper thighs, waist, and shoulders, and a winter coat, which has the same markings in black, but is a dark grey colour.

He does indeed have venom, and it can either be one that paralysis for a short time, or a necrotic venom if he's pissed and wants to hurt his target. He can also spin webs, the glands are located under his two tails which act as spinnerets when he needs to produce webbing.