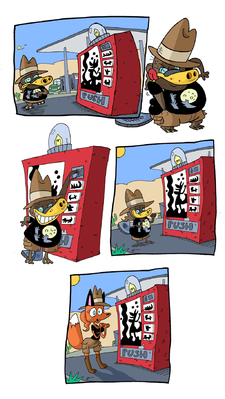 The Vixen Vending Machine as originally conceived. Art by Agouti-Rex.

The infamous Vixen Vending Machine first made its appearance on FurryMUCK in 1996 as a gag device built around the Temporary Random Morph (or TRaM) program, which allowed for objects to be created which transformed the user/player for a short period of time (in this case always into a vixen).

The original creator of the Vixen Vending Machine was Coyote Seven, who played the character Mer'rark on FurryMUCK at the time, and who still has all the original descriptions and code that made it function.

The Vixen Vending Machine became famous (or infamous some might say) when its creator left it sitting out in the West Corner of The Park, and then logged out for the night. No one bothered to sweep the object back home. Instead, furries kept having fun using it (and spamming the park with its use and transformation messages) well into the night and into the next day.

The machine, which could supposedly vend vixens as one might vend soda or candy, took one penny, a unit of MUCK currency. The user was then supposed to select one of the buttons on the machine and push it. The machine "vended" a vixen by changing the user into one for a short period of time, anywhere from one to three hours.

The transformation sometimes implied a change in the victim's personality as well, though of course that had to be roleplayed. The machine failed to work if the user was already a vixen, though sometimes it would fail for no reason at all, a feature meant to frustrate the hapless. Left unaffected by outside forces, the effect could last from one to three hours.

Custom MUF and MPI code, along with the ExtMPI program allowed for the Vixen Vending Machine to keep its library of vixen descriptions (along with scent, hug and even "looked at" messages) all stored on the object itself, and they were not copied. This kept database spamming to a minimum, and made it easier to store descriptions as a property based list.

Several vixen descriptions were made, only some by the creator of the device. Most of them were contributions by other players, and the object itself contained a property that stored the name of the author for each vixen description. In all, there were over a dozen vixen descriptions in the Vixen Vending Machine before the device was deleted by its creator.

Jim Groat, creator of the West Corner of The Park comic strip, was alerted to this gag device by his friend Sean "Tcharf" Malloy, who saw the machine in action on that fateful night. He has since used it as a basis for an ongoing gag in his strip.

His version is different, however. If the user is a "fox", then the machine attacks the victim, through any of a number of methods; hammers, explosions, implosions, The Karl, etc. These were used for quite a large number of the strips.

Besides Groat, the Vixen Vending Machine caught the attention of other furry artists.