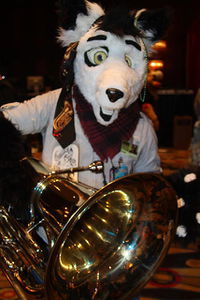 Vivaldi Amadeus Foxerz is a furry musician and fursuiter who lives in Cookeville, Tennesee, U.S.A.[1] His fursona is an arctic fox.

In real life, Vivaldi is a music major with an emphasis on the performance of jazz and classical music.[2] As a hobby, he also composes techno music.

Vivaldi is able to play the tuba (CC and F), piano, mandolin, and bass guitar.

Vivaldi's first furry musical performance was at Furry Fiesta 2012. He performed a song titled "The Fur Con Song" for the Furry Night Live (FNL) show, where he was awarded 2nd place. He also performed "Sukiyaki" on the tuba with Jace Inugami (voice) and Bucker Fuskyote (ukelele).

Vivaldi first appeared in fursuit, playing his tuba, at Furry Fiesta 2012, and later at Furry Weekend Atlanta 2012. He typically plays the "Fat Man Walk" from the Family Guy episode "No Chris Left Behind".