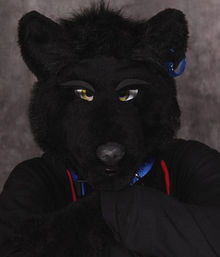 Vinnie Luponero, more commonly known as Vinnie or Vinnie Wolf (born April 22nd, 1981) is (in character) a 5'6 150lbs black Italian wolf and head of the Luponero family. Originally from Emsdale, Ontario, Canada. He can often be seen wearing his huge trademark black trenchcoat. Vinnie also has a crazy sense of humor and loves to make people laugh.

Vinnie does occasional YouTube rants on specific subjects which annoy him greatly using his own witty sense of sarcastic humor and attitude to rant about certain things.

He currently resides in Toronto, Ontario.

Vinnie loves to impersonate many different cartoon characters and actors and enjoys to perform as them publically.. He has found he's been able to manipulate his strong Italian accent to be able to do even the simplest of voices which has helped a lot in entertaining others. 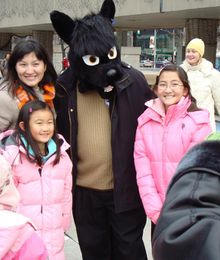 Vinnie frequently can be seen at events and meets in Ontario, Canada. Vinnie's older suit was designed originally by Kitty - a fursuit designer from www.Fun-Fur-All.com. The suit has had some custom modifications to it involving special earrings and hair. Vinnie's suit has appeared at several Toronto based events including Furry Hijinx 1 and 2 which he founded in 2009.

Vinnie attended his first furcon in 2010 - Furnal Equinox in Toronto, Ontario in which he worked as an MC and Fursuit Games Coordinator.

Vinnie's newest suit which was made by Noble Wolf was debuted at Condition: Red 2011.

In 2012 Vinnie was seen at Furnal Equinox, taking part in the fursuit parade and fursuit games as well as at Fan Expo 2012.

In 2013 Vinnie was again seen at Furnal Equinox, taking part in fursuit games, music videos and the parade as well as at Anime North 2013. 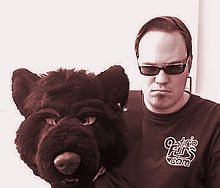 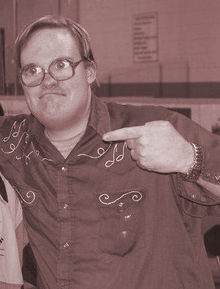 In Character as Bubbles from Trailer Park Boys (2009).

Offline, Vinnie is known quite well as a stand up comedian and celebrity impersonator as well as a former Bubbles impersonator from the TV series Trailer Park Boys having performed with several members of the actual cast until 2009 when he gave it up to pursue other interests. Vinnie has also been in several films and TV shows as an actor and enjoys traveling on the road a lot and performing across Canada at different events and venues. Vinnie is a Second City trained comedian/impersonator who loves to perform on stage, he has had an interest in performing publically ever since he first started doing it at events in Toronto in early 2004.

He currently works on various movie productions in and around the city of Toronto.