Vinci & Arty is a webcomic written by Candy L. Dewalt and Ryan Dewalt, and is primarily drawn by Candy with occasional guest comic strips illustrated by various artists. It is published once a week on Tuesdays on its own website. It features the daily life of Artisan P. Sunspot (Arty), a Yumar with a craving for Krispy Kreme donuts, and Richard Nicolaides (Vinci), an anthropomorphic raccoon attracted to "shinees".

The central events of the comic are parallels to the real life of the authors and the strip is usually in black and white. Although the title characters form a gay couple, much of their interaction is almost indistinguishable from a heterosexual couple (unlike many other gay-themed comic strips, where the "gayness" of the characters is often quite evident).

Vinci & Arty was first published in February of 2003. In November of 2005, Vinci & Arty introduced the AskArty Show, an Internet radio program that was until recently broadcasted every Wednesday through the LT3M website. The show is offline due to scheduling matters, but has not been abandoned wholly. 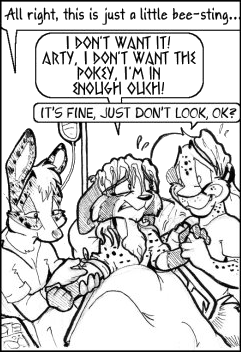 Vinci & Arty is a storyline-based comic and has its own set of major characters and supporting characters who reoccur throughout the comic. Characters include: