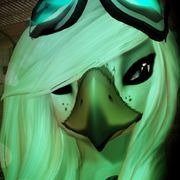 Victoria Loveless, also known as Tori or the alternate character Page Charlan, is a furry artist in Linden Lab's Second Life.[1] Most notably known as the designer and owner the Second Life sim, Yiff Alley Lounge, along with her partner Lina Pussycat.[2]

Victoria has been a long term resident of Second Life since late 2004, however not always active in the furry community there. In 2011, after being out of the furry art and games communities, she started getting involved again and identifying herself a furry in Second Life as well.

Since her first days of Second Life, she has found it to be an outlet for creative energy and expression and originally sought out to be a clothing designer, but shifted her attention on freelancing as a builder and photographer. While always giving thought to the idea of opening her own club, the idea came to fruition in March of 2012 with the public opening of Yiff Alley Lounge.

Before the evolution of the SL avatar Victoria Loveless into a furry, her first real fursona took life in the game Furcadia by the name Sithra in 2005.[3]