Over the Hedge (film)

From WikiFur, the furry encyclopedia.
(Redirected from Verne)
Jump to: navigation, search
Culture > Movies > Over the Hedge (film) 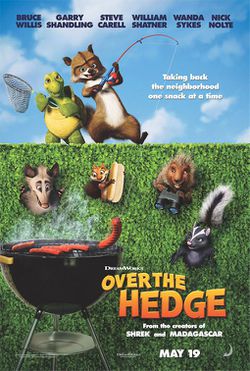 Over the Hedge is a computer-animated animated feature, based on the United Media's comic strip of the same name. Directed by Tim Johnson and Karey Kirkpatrick and produced by Bonnie Arnold, it was released on May 19, 2006.

Produced by DreamWorks Animation and distributed by Paramount Pictures (due to Viacom's - the parent of Paramount - acquisition of its former parent company DreamWorks SKG), the film was rated PG by the MPAA for some rude humor and mild comic action. The film was made in Redwood City, California.

A raccoon named RJ (Bruce Willis), after unsuccessfully trying to get a snack item from a vending machine, ventures into the cave of a hibernating American black bear named Vincent (Nick Nolte). While trying to steal Vincent's cache of goods, as well as his red wagon and blue cooler, RJ accidentally wakes up Vincent, who after realizing what RJ is doing, tries to scare him into giving his stuff back. In a panic, RJ knocks the wagon of food into the street. It looks okay, and RJ and Vincent laugh about it, when it is run over by a truck and is destroyed.

A furious Vincent gives RJ an ultimatum: Replace everything within a week, or get eaten. RJ finds the new suburban development El Rancho Camelot Estates in western Indiana where he can steal all the replacement items he needs. There, a community of foragers led by the practical turtle, Verne (Garry Shandling), awakens from hibernation. He immediately directs his charges — Hammy (RJ, during the film, calls him "Hamilton") the cookie-addicted, hyperactive squirrel (Steve Carell); Stella the skunk with attitude (Wanda Sykes); Ozzie the Shakespearean opossum (William Shatner) and his 16-year-old frequently embarrassed daughter Heather (Avril Lavigne); and Minnesota accented porcupines Lou (Eugene Levy) and Canadian-accented Penny (Catherine O'Hara), and their young offspring Spike, Bucky, and Quillo — to start they're yearly search for food to store. To their surprise and trepidation, they discover a hedge: Which they call "Steve" until RJ directs them otherwise. Coming onto the scene, RJ prompts them to scavenge for the food treasures he promises they will find beyond it while Verne fears for what traps or predators also await. Yet, a determined and desperate RJ gets the woodland creatures to explore. Using a combination of con artistry and caper movie antics, they successfully snatch a wagon full of Girl Scout-like cookies (which begins Hammy's addiction). Seeing this, the whole group except Verne joins in and begins to steal other foods from the neighborhood of overfed, SUV-driving humans, along with other items on the list RJ secretly keeps. 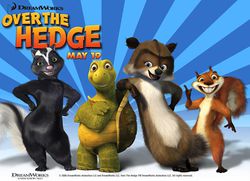 All this prompts the ire of home-owner association president Gladys Sharp (Allison Janney) , who hires a pest-control specialist Dwayne LaFontant, who calls himself The Verminator (Thomas Haden Church). Seeing this, and realizing that they might be in danger, Verne tries to return everything they've stolen as a bargain to the humans to spare their lives — leading to an action set-piece involving himself and RJ, a chasing "Play"-spouting dog (Nugent), a wagon piled high with goods and goodies, and a canister of barbecue propane, and a backyard slide that launches the wagon, Verne and RJ into the sky. The sequence ends with the two animals falling, unhurt, to earth, while the errant, ad hoc rocket crashes into Gladys' black SUV with a stylized, mushroom-cloud fireball. When RJ and Verne are rocketed back over the hedge, RJ and the other animals get mad at Verne. While trying to warn the others of RJ's plan to use them, Verne turns on RJ and claims that he is making his friends to do whatever he likes because they are "too stupid and naive to know any better". Verne then tries to take back what he said, but the damage has already been done and circumstances get worse as Verne tries to come up with a less hurtful description and says "ignorant." But no one is more heartbroken then Hammy, as Verne's hand was unintentionally pointing at him during his outburst. Hammy tearfully says, "I'm not stupid," and takes the comment seriously with him being very hyperactive and somewhat childlike. Angry and hurt, the animals leave Verne and he is all alone. Verne is then by himself, as he wonders what is truly best for his family and whether he belongs in it any more. But Verne isn't the only one with problems.

During his time with the foragers, RJ can't resist but having a growing affection for all of them. They're so kind, soft, and even give him a spot for himself so he wouldn't need to sleep on a tree. He slowly realizes that he shouldn't be using them for his own selfish needs, but should he blurt them out his secret and break their hearts?

RJ then goes to Verne, cools down and cheers him up. With RJ's help, Verne apologizes to his reluctant friends, and they welcome him back. Now, RJ stages the biggest heist yet, from the supplies of the big "welcome to the neighborhood" party Gladys plans for the following day. With Stella disguised as a cat, in order to distract the haughty guard-cat Tiger, the others raid her kitchen. They're almost in the clear when RJ. spies a can of Spuddies;— Vincent's favorite food, and the last item on the list — and in trying to retrieve it, like at the beginning, keeps the rest of the crew in the house long enough for Gladys to spot them. The Verminator's traps catch all of the animals;— all except RJ, who escapes with the wagon of Vincent's replacement goods. As the caged others are driven away, RJ meets Vincent in the woods, where the bear congratulates RJ on successfully "conning the suckers" and getting what he needed. He paints himself and RJ as two of a kind. Realizing the path to which his unchecked drifting will lead, RJ rightfully turns on Vincent, who did not deserve all the food, and uses the piled-high wagon to crash into the Verminator's van, launching a rescue attempt. The enraged Vincent goes after RJ, determined to kill him. While being chased by Vincent, the young porcupines direct Dwayne's van into Gladys' home, much to her dislike. Vincent is conked by a hammer, pricked by Penny, and is finally sent flying with a balloon — a scene which is a parody to the ending of Alien (film). All of the animals pull out of the van as the verminator regains consciousness.

Vincent lands on the animal's side of the hedge, where he begins to claw furiously to get RJ, while the verminator activates his electric wand and attempts to poke out the animals, determined to finish the job. Suddenly, the back door to Gladys' home swings open, and she emerges and clicks on the dreaded weed whacker and begins to swing furiously at the hedge, exclaiming, "Show your ratty little faces! Stay in the woods where you belong!". Trapped between Vincent and the humans, RJ and Verne quickly concoct a plan. They give a highly caffeinated cola to the already adrenaline-rushing Hammy (notorious throughout the film for his ridiculously high levels of speed and uncontrolled energy), leading to a scene (reminiscent of others from US TV's The Twilight Zone, Episode 70 of Futurama (Three Hundred Big Boys) and the DC Comics character the Flash) where his perceptions and motion are so sped up that the world appears to stand still, as if time has stopped. Hammy, strolling along but at super-speed with his power to travel through time itself, adjusts the trap controls (and collects one of his beloved cookies on the way). As he slows down back to normal speed (seen as the rest of the world gradually speeding up to him), RJ and Verne's plan succeeds, leading to Vincent getting trapped and set to be shipped to the Rockies, Gladys fighting with the authorities and being arrested not only for the illegal man trap she arranged, but also for assaulting a police officer, and the Verminator tiptoeing away from the scene, only to be chased by the playful dog from before. RJ, now a hero to the other animals in deed as well as in word, settles down and agrees to be a father figure to the animal community. They in turn explain that if they had been truthfully told about RJ's predicament in the beginning, they would have helped him settle his debt, "...Because that’s what families do," says Verne.

After the credits, the characters return to the vending machine RJ visited during the opening scene, now fully stocked. The entire vending machine is emptied in one shot to the delight of all, but the PUSH bar cannot be moved and no food can be retrieved. Hammy comments, "Kinda anti-climactic."

The animals are shown to survive, as they appear in Hammy's Boomerang Adventure, a short film exclusive for the DVD release. 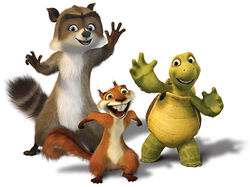 Over the Hedge won the 2006 Ursa Major Award for Best Anthropomorphic Motion Picture.