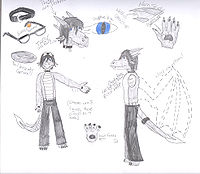 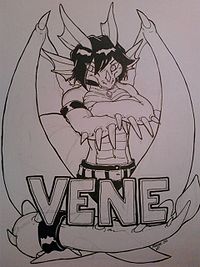 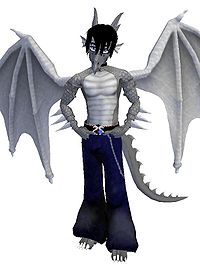 Venerabela as shown on IMVU 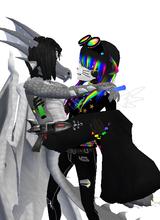 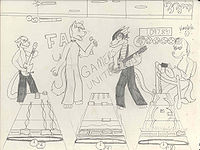 Vene (Venerabela) is said to be an anthropomorphic western dragon with a feline's personality. This is because he tends to purr and meow like a cat does and tends to nuzzle up against people's legs like a cat. However, he still retains a lot of the usual dragon's personality. He has neck-long black hair arranged in an emo-ish fashion. He has sapphire-blue slitted eyes and wears glasses. He has four horns on his head (two on either side, both connected by webbing) and large wings that allow him to fly at above supersonic speeds (after which he goes deaf for about five seconds).

Having the ability to shapeshift as well, Vene can assume the form of any other anthropomorphic animal.

Venerabela is usually seen in a pair of black homey slacks, a black collar, and a pair of black thick-rimmed glasses. Occasionally he will wear a pair of fingerless gloves and a crazy t-shirt to mix in.

Tony M., the person behind the dragon, has two sisters and four pets: a black cat (who passed away on November 28, 2008), a gray tabby kitten (Lucky), A tan colored Rat Terrier (Sophie), and a Miniature Pinscher (Caesar). He loves to draw in his spare time about random furry/scaly things, or just something that peaks his interest. In any other random time, he is on IMVU or chatting with some of his furry friends. He is Catholic in religion. As quoted by him: "Who says I can't be a Catholic furry?"

Tony has a love of dragons, leopards, canines and felines. His fetishes (all nonsexual) include Transformation, Tails, and fatfurs

He currently runs the IowaFurs page on Fur Affinity

Vene generally does traditional artwork. Every now and then he will sketch something on his PDA's Sketcher program. He has been taking pretty cheap commissions and will almost always accept a trade.

Vene contributed a picture for Dragoneer in support of the FA: United 2010 website. (Shown bottom-right)