Veneer's Reference Sheet
Veneer Rene Maro (born May 17, 1993)[1] is a furry artist and fursuiter who lives in Roselle, Illinois, USA.[1] She was born and raised in Canfield, Ohio, USA and moved to Illinois in March of 2012.

Her fursona is a snow leopard, dominantly gray and white with rosette spots covering most of her body.

She takes great pride in her super-floofy tail and loves hugging it.

Veneer has been drawing anthropomorphic animals since she was a child, but only discovered the furry fandom around 2010 [2] when her friend San-Ryuuk watched her drawing "Wolf People". He later introduced her to the website Fur Affinity where she now conducts business as an established Furry Artist.

Veneer attended her first convention, Midwest FurFest, in 2011 for a very short time. She also attended Anthrocon 2012 for a brief few hours, and finally spent a full weekend at Midwest Furfest 2012 where she sat in Artist Alley on Friday, Saturday and Sunday. 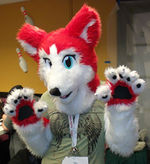 Rixxi at LAFF Bowling
Rixxi a red and white husky fursuit partial.[3] Her personality is hyper, happy and fun-loving. She acts as an extension of Veneer's child-like side. Rixxi was made by ItalloNova, and debuted at Anthrocon 2012.

Veneer plans to build her own suit of her main character.

Veneer posted this message on her Furaffinity page that told that she was leaving the fandom:

"I officially announced my detachment from the Furry Fandom around the first of the year 2014. I want to pull away from the community and all the bulls*** it brings. Though I shall keep my true friends close, and may post art and take commissions. I am even contemplating performance in suit outside of the community, such as for events, fundraisers and other such things. I'll still be around, but scarcely. I Please respect my decision on this. "

Veneer has since been scarcely active, but occasionally posts on Furaffinity and attends Midwest Furfest yearly.