From WikiFur, the furry encyclopedia.
< User:SlyRabbit(Redirected from Velveteen)
Jump to: navigation, search 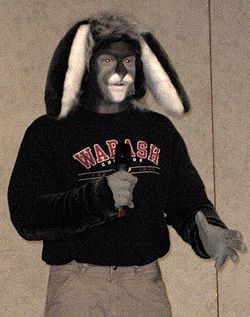 Velveteen is the sad tale of a plush toy - Buster the bunny - and his unrequited love for his owner, Max. It was created by Sly Rabbit and performed live at the Midwest FurFest 2005 Variety Show.

Please note that this is not a transcription. The actual act was 50% memorized and 50% ad lib.

It’s going to be our night. I just know it. The day was for your friends, what with the party and all, but now you're coming up to the bedroom. You're going to pick me this time. I’ve waited on this shelf night after night, watching you sleep, and I know. Tonight. Tonight things go back to the way they were.

I’m twelve years old. I certainly don't look it, do I? I mean, that's a lot in plush years. (Chuckles) Yeah. twelve. Going on thirteen this year. That makes Max eighteen. (Pause to digest that.) Wow. Hadn’t thought about that in a while.

(He moves, maybe to flop down, maybe to look up and think about it.)

The GI Joe that shares my shelf tells me I’m crazy. “You’ll worry your stuffing flat,” he tells me. “He’s a grown man now, and we’re old hat. Surplus. He let go of his toys and that’s that.”

(sighs and smiles an ironic smile.)

He’s right. I don’t want him to be right but that doesn’t change the facts. Hope’s the only thing I have up here on the shelf, night after night. I mean, a rabbit’s gotta have his hobbies, right? Right?

Buster. That’s what he calls me. I got the name at his sixth birthday party; I was his surprise last present. I was laying on the bed with a little red ribbon around my neck, all dolled up. When he saw me we were the best of friends right there and then, no questions asked.

I was the rabbit he hugged when he was too cool to be touched. I was the sympathetic ear when he was busy looking tough. I was first mate Buster of the USS Jellybean when he was too old to play pretend. We braved the horrors of high school life, side by side; algebra, history, that boring British literature class... everything. Even if he was a little old for a stuffed rabbit.

I stood by him all this time and now he wants to forget me. Put me to one side. After all I’ve done for him, now he’s made me into a dust collector on his shelf. A relic. A decoration. A nothing!

Oh, my. I didn't mean that. Max isn’t doing that to me. He’s just busy. High school graduation’s around the corner, after all. No time for a stuffed bunny rabbit when you’re busy becoming a man, right? He still remembers. He has to. I'm sure of it.

(He pauses to touch his shirt, collect something, and hold it up to the audience.)

I still keep his tears in my chest, his kisses on my cheeks. Memories of the old days.

(He stands on his tiptoes to look over the edge of the display shelf, presumably at Max.)

Here I am, Max! Right here! Right where you left me! Pick me up, hold me.

(Suddenly he gets excited and runs to the edge of the stage, trying to look cute.)

(pauses, and suddenly the energy deflates from his face.)

He’s sleeping with someone else tonight. Something pink. Something different. Cassandra; that’s what he calls her. She’s been coming around every night for the past five weeks, sleeping with my Max. They look so cute together.

(He pauses on that.)

It’s nice, really. He smiles every morning. If it keeps him happy, than I am happy. At least I think I’m happy.

Is it getting cold in here, or is it just me?

(Pauses to watch the bed for a while longer.)

She’s giggling. He’s smiling. Max is holding her like he used to hold me. Soft. Gentle. Vulnerable. It reminds me of when he was seven years old and he’d let me sleep under the covers, just because he wanted to be warm and cuddly with somebody. That’s the Max I know.

Oh well. It doesn’t matter. He can sleep with anyone he wants but I know I’m still his Buster. I see it in his eye. He may be too busy for me sometimes, but Max still loves me.