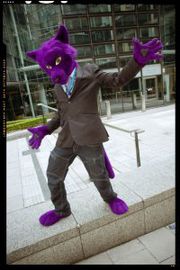 Var is a fursuiter who lives in Surrey, England. A regular attendee of the LondonFur meets, he has also attended ConFuzzled 2010 and ConFuzzled 2011. 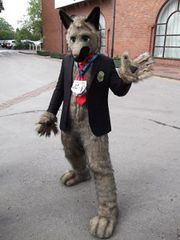 'Ziu' the German Shepherd at ConFuzzled 2011

His first fursuit was a partial suit of his main fursona, a purple 'Ribena' housecat, named "Var"[1], made by SolSheppy, which he obtained in April 2010, and which made its debut at a LondonFur meet[2]. At the start of 2011, Var obtained his second fursuit, a full suit of a German Shepherd named "Ziu Tyr"[3], also made by SolSheppy.