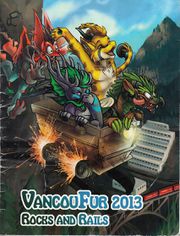 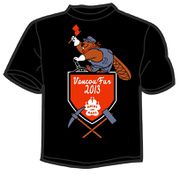 VancouFur 2013 was the second VancouFur convention. It took place from March 1-3, 2013, and was held at the Executive Hotel, in Burnaby, British Columbia, Canada.

Local furry DJ Akonite was elected chair of the convention. Attendance rose to 484[1] guests; an increase of almost 40% over the previous year.

The three Guests of Honor were the owners and artists of Con*Tact Caffeine: Jana Stout (Maly), Jon DiFrancesco (Jondi), and Omekin Lutz. The convention’s featured charity was once again the BC Siberian Husky Club, for which was raised $1275.[2]

The theme for 2013, "Rocks and Rails", was inspired by the province's influential railroad and mining industries.[citation needed] The theme was manifested around the hotel via signage resembling railway crossing signals.

The final ad was made up of the 4 winners' artwork and each entrant was also put up on the VF galleries and in the conbook.

2013 was the first year a local non-furry artist was brought on to create a GOH Dinner cake. Mother to one of the staff and definitely a furry ally, Julie (http://juliesmixedmedia.com/) created GOH 'Head' cakes for weremagnus, jondi and Omekin(Who couldn't make it but Maly_Twotails and the other GOH's enjoyed taking bites of the non-attending GOH and taking pictures.) Picture of the GOHs with their cakes