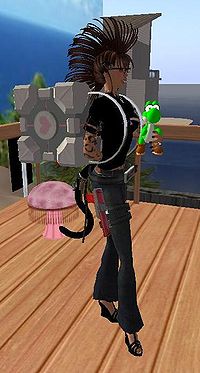 Vallie Woodget is a neko (half-human, half-kitten) who exists in the realm of Second Life. She lives in a little house on the beach with her husband, Fearless Hammerer. Together they have a beautiful daughter named Hope Rose. Her family tree includes her three brothers: Apollo Nemeth, Kushn "Cloud" Diesel, and Yohei Torok. 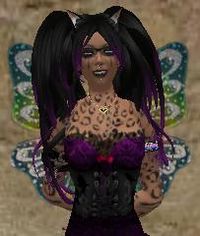 Most of her time is spent simply hanging out; she can usually be found with her family and often also with friends Farrah Ferdinand and Cricket Crabe. When she finds herself unaccompanied (or simply bored), she also enjoys shopping, collecting freebies, lucky chair-hopping, and dumpster diving. She comically cannot walk up stairs and would much rather voice chat than type due to chat lag. 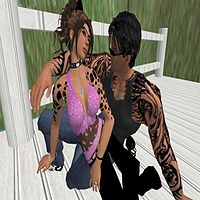 Vallie's got a certain look to her. She doesn't really fit into any solid category. Usually, she's a goth neko. She often sprouts butterfly wings and other prim attachments, ranging from swimming fish to Nintendo memorabilia. Occasionally she lapses into something even less mainstream, like a mermaid or a tiny butterfly or bunny rabbit. Her collection of tiny avatars is enough to rival anyone in Second Life.

Vallie's soul lives in the body of a 30-year-old woman in central Florida. Though she is a full-blooded human, she often wonders what it would be like to have a tail. In March 2009, she met her Fearless for the second time - this time on his home turf... Australia! She has made many good real life friends through Second Life and looks forward to making more along the way.