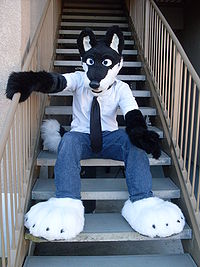 V's fursuit, created by The Furducers.

V (also known as Vega or Vegaguy online) is a wolf furry who lives on and works at the Dover Air Force Base in Dover, Delaware, U.S.A. He is originally from Tampa, Florida, U.S.A. V is married to Audri.