From WikiFur, the furry encyclopedia.
(Redirected from Utlah)
Jump to: navigation, search
Community > People > The Utlah 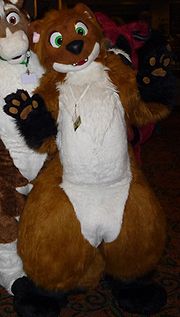 vin the weasel at FC 2009
The Utlah is a werewolf who lives in England. He organised the three EuroHowl meets (specifically Howls) of the 1990s, set up the Weremail mailing list, and is one of the central characters in the UK Therian community.

He is fond of anime, the sport of drifting, and the kind of cars that can do it.

Recently The Utlah has taken to fursuiting, having long desired a Verdun Manor werewolf suit. He appeared as Kibble the husky at Eurofurence 12, as Utlahski the Russian version of his arctic wolf at Further Confusion 2007, and Vin the weasel at Eurofurence 13.