Hi there, Baracudaboy, and welcome to WikiFur! Thanks for your contribution - I've started the Cub Hub article; if you want to add to it, feel free! Let me know if you need any help not already provided. :-) --GreenReaper(talk) 20:05, 2 April 2010 (UTC)

Now if someone tries to fuck with it I'll have the original saved :D 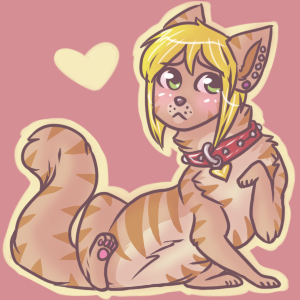 "Baracudaboy" is a 20 year old genderqueer furry who has been in the fandom for about 4 years. His favorite parts of the fandom are fursuits and he hopes to make one in the near future of his fursona Gregory. He lives in Northern California with relatives and regularly attends Humboldt Furs meets. He also attends furry conventions and has been to both Further Confusion 2009 & Further Confusion 2010.

File:Gregorycat.png
Gregory is a domestic ginger tabby cat. He is 5'6 and a little chubby around the midsection. His coat is a lush dark orange with brown stripes along his entire body

He fancies wild parties, body modification and long boarding. He can be brash and always acts on his emotions rather then planned out logic. Sometimes this works for him, and well, sometimes it doesn't. Gregory was formally known as Felicia Mertallis but his name has since changed along with his gender as his creator maps out his own ever evolving sexuality. Gregory is Baracudaboy's main fursona and reflects his personality best. 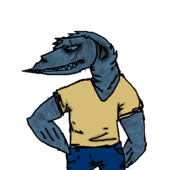 Oscar is a pretentious old fish with nothing much on his mind but drinking and scoring with naive little things. He was born in a small fishing village in Lithuania where he attended Kaunas Food Industry College to become a certified chef. He rose to the very top of his ranks in a short amount of time after graduating and spent many a happy year aboard crabbing boats, cooking for the salty sea men and...enjoying their company. After a good run on the biggest and best of crabbing ships he decided to settle down in Germany at the age of 46. He now spends his time at the local pub and enjoying his favorite past time of bicycling.

Tom is one dangerous cat! A Russian Blue with old ties to the German hitler youth and a missing eye; Tom is not one to be messed with. His remaining eye, a mottled yellow with spots of red it seems to stare very deeply into your soul, sucking out any secrets you might have been comfortable keeping to yourself. A master of disguise and torture, he can get whatever information out of his victims that he needs. 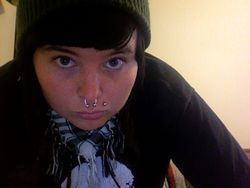 Living in "weed smoke" Humboldt is a tough job for this little kitten! :p A rough and tumble dude with a taste for liquor and good times. Loves to attend raves, drum circles, and anywhere she can light up and get his groove on. An avid stoner, furfag, and disturbance to the peace hes an okay guy once you get to meet him. For a while he got caught up in trolling with the He wants to move to Seattle as soon as possible but knows that might take a while...