From WikiFur, the furry encyclopedia.
< User:Yamavu
Jump to: navigation, search 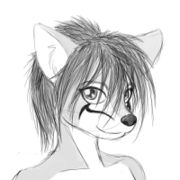 an image of Jade Nyomi by Yamavu/StalkerAT

Jade Nyomi is a vixen character designed to be used by and for the furry fandom.

Design by consensus. Plan for a rather stereotype furry, maybe 1 or two non-extreme kinks (cuddling, costuming, ). Do not make her into a generic vixen as in vixen jokes, we have plenty of those around. She should be able to

As of December 2008 the image appears on 8 Wikipedias. It's also available on edupics, schulbilder

It was copied illegally here, here, and was redrawn here. I don't really care but I want to point out that a single line of attribution and license information makes the illegal legal, and it seems these people were not able to do that.

The image was supposed to be a general example of furry art while being inoffensive and available under the most known free licenses (GFDL, CC-by-sa). These licenses both include a viral clause, so works including the character are needed to be published under GFDL or CC-BY-SA (preferably both).