The furry artist Woofie Brisbane, also known as Woofie, Woofeh, and AcidBlue Raccoon. She arrived onto the furry scene around October 18th 2004, after a good long talking to from Swift Fox and Silaria informing her of a group of people who were more then accepting of her and her artwork. Thus here she is. Poking out from her hole in the tree once in a while which is located for the time being in Orlando, FL. Soon to be Louisville, CO. 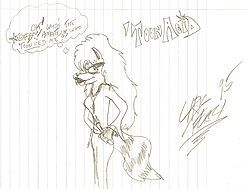 Since the 4th grade Woofie knew she had a very minor talent for drawing costumed wolf heads in all of her school notebooks. Figuring it was just something she did, not something which would springboard her into this "furry" world. She spent many years just using the hobby for herself. She drew with friends during classes and during this time the ever reoccurring character Acid was born. In little friendly grudge filled sketch matches between a very special friend, Chris "Psycho Rabbit" Ferri and herself. Thanks to him, the raccoon was born in 1995. School classes were basic, she never took any special classes for her artwork, or computer skills. Just growing from self taught methods to this day. And still learning as she goes.

Woofie pounced into the fandom as a grey wolf, as suggested cause of her love for wolves. Although being part American Indian she felt that she wasn't worthy of such a miraculous animal, plus it just didn't seem to fit her as well as the raccoon. So that would soon change as her raccoon form peeked its way out of a little tree. And decided to return it's way into her life.

Woofie Brisbane - A grey wolf, the secondary character based off her her 8 year old nickname. 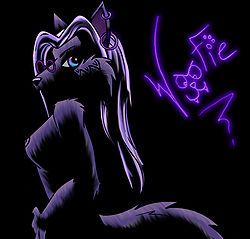 Woofie Brisbane - The grey wolf stands at about 5'8", long flowing dark brown headfur that falls to her mid back, detailed with blond bangs. Light blue, and lavender bi-eyes. A slender dancers body with long legs and D-cup breasts. Plantigrade legs (better for the heels she wears). And Silvery feather, angel wings, with a wingspan of about 5 ft. 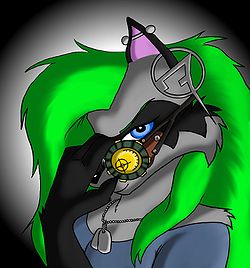 AcidBlue Raccoon - MAIN FURSONA The genetically altered raccoon which stands at 5'5", very long butt length neon green headfur. Icey blue eyes, two sized pupils (the left regular sized and the right a tiny speck of pupil). Her body build is womanly curves with muscles and about B-cup breasts. She has digigraded legs and tends to have to wear custom strappy boots over them. And before I forget, carries her fireman's axe with her a lot.