Hi there! I'm Pitón Peludo, also known as Un Pitón or Jar'ard Ganesvoort (my two fursonas - more about them later). I am a furry as of the late 2006, when I first found out about the fandom through internet searching for a giraffe. One thing let to another, and I found the fandom!

The story behind the name Un Pitón references to many of my interests. In spanish translation, it means A Python[1]; I admire the Spanish culture, and am currently pursuing it as a second language. I am a big fan of Monty Python, as they are also known as "The Pythons'"[2]. I'm also quite fond of reptiles, the snake especially. Each of these connections went into the making of my initial name. It wasn't until sometime in the Fall of 2007 that I took off Un and added Peludo, which is Spanish for furry when in reference to an animal[3]. Thus, Pitón Peludo became an adopted name for me. 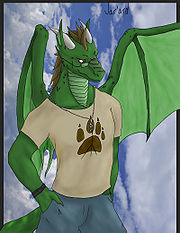 Generally, I claim to have two fursonas: Jar'ard Ganesvoort and Pitón Peludo.

The first is my primary fursona Jar'ard Ganesvoort, and is also the first anthropomorphic image I tried drawing[4]. He is a green Wyvern dragon, with a complicated family history that compiled to make his dynamic personality. In general, he is very hyper and social, wanting to be friends with anybody willing to talk. The cause of this hyperness can be related to the massive amounts of Jones Soda and Jarritos, which fuels his liking to Ultimate Frisbee, swimming, and jogging. Jar'ard is mostly intended as my roll-playing fursona, as his extroverted personality helps with interaction with other people and furries.

My second fursona is Pitón Peludo. He was created as an introvert personality of Jar'ard. A Green Tree Python, he likes to bask in the sun while observing everything happening all over. He dedicates a lot of his time to studying for his classes, while his free time is spent drawing, writing, listening to music, watching movies and TV, and doing other fine-arts activities. Most of the time, I consider myself typing on the internet, as I am doing here, to be Pitón working.

Currently, I am trying to put together a comic strip based on my life at the The Missouri Academy with an anthropomorphic characters as students and staff. It's called Nafural Selection, the title referring to details about the Academy[5]. Motivation came for its creation by the Academy's Newspaper, as they were in need of a comic strip. The publication in the newspaper was thwarted, since the newspaper only turned out to be more like a newsletter, and the Academy's strong adherence to a policy of IQ (abbreviation for "Integrity and Quality")[6], which limited the content of the comic strip to bland story plots.

As of the beginning of 2008, preparation for another comic strip are coming together. The basic description is it will be an anthro mystery and justice plot line, very similar to that of Law & Order. I'm still in preparations, with character development and story-line notation.

As of now, I am currently attending the Missouri Academy, an early enrollment college program for Juniors in high school based on the NWMSU campus. I will graduate in 2009 with an Associates in Science and my high school diploma. If anybody would like to talk to me, feel free to anytime. In fact, I'm asking you to talk to me. I enjoy meeting new people.