Tamias the Chipmunk is a digital artist specializing in illustrations and Flash based 2-D animation. He has known about the furry fandom since 1995. However he did not join the furry fandom until Dec, 31, 2007. He is currently active in Second Life as a builder and officer of various second life groups and locations. He also posts artwork on Fur Affinity.

Tamias is also the author of The Chipmunk Kingdom a complex storyline covering the history of a nation of Anthropomorphic Chipmunks and the world of animal and human nations in which the Kingdom and its characters interacts with. Also the Chipmunk Kingdom forms the bases of his two principal fursonas, Tamias Orenberg and Jerry Lee.

Outside the Furry Fandom, Tamias has a variety of interests including Woodworking, High end Home Audio and Video, and keeping track of local urban developments. Music Genres is eclectic including classical, new age, electronica, contemporary, and techno. However Tamias has an interest in classical pipe organ music.

Tamias has been subscribed Second Life as Tamias Orenberg since 5/14/2008. He is the founder and Chipmunk Chieftain (group owner) of the Chipmunk Kingdom a roll playing group based on the storyline of its namesake. He is also an Officer of a group of builders and scripters called the Mad Scientist Union. In addition to these tasks he is also an administrator of Wolfee Darkfang's Spirit Wolf Island. Tamias is currently a builder working for the Leaky Faux Pub, having build the pub and currently creating skyboxes and homes to be put on sale in Second Life.

In the Past Tamias was an Estate Manager of the former Empire of Things region and its chief architect. He also owned and managed the Worlds End Dance Club. During his final months on the Empire of Things he constructed the Chipmunk Kingdom. Covering the Entire region the Chipmunk Kingdom was his largest and most ambitious second life project to date. He has been hired on by Slashy Sands as her partner and chief builder of the Leaky Fauxes Pub.

Dating back to 1990 Jerry Lee is the oldest of Tamias's two principal fursonas. He is currently a male anthropomorphic chipmunk from the Chipmunk Kingdom. He is the main protagonist of a story in which pitted him against the Inner Circle a diabolical cult like group that took over the Chipmunk Kingdom and nearly eradicated the Divine Destiny the primary chipmunk religion and culture. Jerry is brash and in your face. He never backs down from the challenge. A hard charger, go getter, hold 'em high, do or die type of guy Jerry's determination made this brave hero the Inner Circle's eventual undoing.

Jerry begin life in 1995 as a fan character of Chip n' Dale Rescue Rangers. However years of development and revisions resulted in his current state as the protagonist of the Chipmunk Kingdom. However he was placed in retirement about 5 years ago when he sacrificed his life to insure his storyline's main villain was utterly destroyed by the Sun's Wrath. But on March, 7, 2010 Jerry was revived from hiatus as a Second Life avatar to be used in roll play and as a secondary account to compliment Tamias in his Estate Management duties. 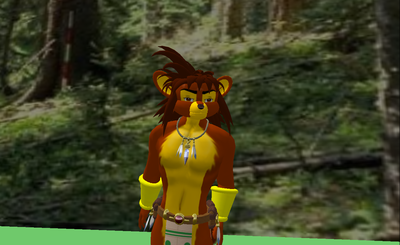 As an orphened Kit adopted by a human family he has no memory of his blood parents. Raised as a human Tamias faces a difficult choice to either stay with and uphold what his family thought him at the risk of alienating his fellow chipmunks or accept and embrace the chipmunk he is at the risk of letting down the humans who raised him. Making this already difficult choice even more daunting is his choice will affect the outcome of the struggles between animals and the HSO.

Believing Jerry Lee to be one of the greatest chipmunk to have ever lived for saving the Chipmunk Kingdom from the Inner Circle 300 years ago, Tamias used the power of the Synergy Crystal to revive this hero. He has assigned to Jerry the task of aiding the Chipmunk Kingdom and the rest of the animal nations of the world in the fight against the HSO.

On the surface Tamias is docile, very courteous, and every bit the diplomat. But beneath that surface this chipmunk is very loving and filled with passion and emotion. Dealing with bouts of loneliness due to his internal struggles Tamias loves companionship and is very affectionate to his friends. 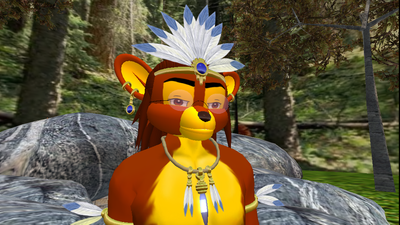