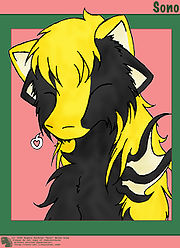 Sono in a typical watermemlon schemed background.
Sono Eliane Anderson-Kei is the alias of Angela Kathryn Helen Long. She is an artist of both furry and non-furry characters, though recently her furry work, more so feral than anthro, has become prominent. She lives in the downtown New York City area, attending college at the School of Visual Arts as a Cartooning major.

She is from the Neptune area in Monmouth county, New Jersey. She graduated in June 2006 from Communications High School in Wall, NJ.

Sono's fursona is a flightless mamalian dragon called an Een. The species if most noted for having four ears instead of two. The anatomy is simmilar to that of a hyena. Her coloration is dark grey with a gold-yellow mane and muzzle, as well as her upper set of ears. She appears in feral, anthro, and kemonomimi forms.

Sono has a bizzare obsession with 'watermellon' as a color scheme and hearts in dialogue bubbles.