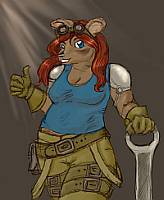 She still lives in Rockford, although plans to move closer to Chicago in the near future. She's a member of LAFF This user page is her first attempt at editing anything on wiki. Sabrina is a MTF Pre-operative transsexual, and has been in the furry fandom since 1995, when she was introduced to Furry through the works of Eric W. Schwartz when she first learned how to hook up her Amiga 2000 computer to the internet and found Amy the Squirrel and Sabrina.

Sabrina previously went by the name Stacey, but in 2006 she reinvented herself and took inspiration from her favorite nerdy skunkette and took the name Sabrina. Sabrina is a female brown bear, and while she loves to be girly and frilly, is also a tomboy and loves to get her hands dirty working on any of a number of different projects. She's very seldom without tools of some sort, and seems to always have a wrench on her somewhere. While she's been in the furry community since 1995, she only attended her first Furry Convention in 2007, with Midwest Furfest 07 being her first Furry Convention.

In 2008, Sabrina attended Rocket City Furmeet for the first time, where she also volunteered as a DJ for their Sunday Night Dances. While attending, she was selected as RCFM's first "Attendee Guest of Honor."

Sabrina's a fan of many other types of sci-fi and geek fandoms and is no stranger to conventions, having attended Anime Central, GenCon, and other smaller conventions as well.

Sabrina is also a podcaster, with her own syndicated podcast, Sabrina Talk, which is a podcast-journal detailing her life, focusing on being transsexual. Sabrina Talk is syndicated on the Trans FM Radio Network. She also works for other podcasts, including being sound editor for Tales From the 'Verse. Tales From the 'Verse is a Firefly Fanfiction Podcast. Sabrina is also a voice actor, currently working on the Firefly Audio Drama, Dark Places, which is still under production.