Page is highly outdated, will update this as soon as I find the time for a whole rewrite![edit] 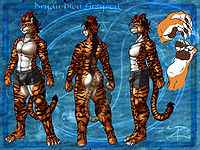 I'll use this to introduce myself and tell you some things, so you get to know me. Let's start with my basic hobbies:

I'm also a big fan of doujinshis, but always just got to read them online as the German doujinshi community sadly is quite small and it's not as easy to get my hands on some of them in a language I understand. Getting furry magazines/comics is really much easier.

My favourite animes are:

My favorite mangas are:

I mostly buy mangas, as most animes are simply too expensive for me.

I'm also a big fan of nearly all Megaman games, despite the fact I normally hate Jump 'n Runs. Oh yeah, my Nickname, RealZero, has it's origin in Zero, my favourite Megaman X character.

Like you will see in my favourite bands list I mainly listen to all kinds of Metal (the music^^). I also like Hard Rock, epic and fantasy music and some gothic stuff like for example ASP.

I'm also a big fan of all kinds of RPGs, PC and console like Final Fantasy, Grandia, Atelier Iris, and Pen&Paper like (especially) the dark eye, D&D 3.5 and World Of Darkness.

I don't know thaa~t much about the fandom, but I try to get more into it. After a long time of "just" looking at pics I was finally able to order some magazines and some prints and even an own fursona, drawn by my friend Yuki-Inu.

By now I own several magazines and comics, originals, prints and similar stuff regarding the topic. I also attended Eurofurence 14 being my first furry convention and I intend to attend it now regularly and maybe even some other conventions later, as long as they are located in Germany or someone else pays my trip and stay there.^^

Besides at WikiFur I can be found on these other related furry/anthro websites:

Bryan is my fursona, a Bengal Tiger. His character and interests are nearly the same as mine, being my "alter ego", with just one little exception: He is more sportive and a bit muscular^^

The first pic of Bryan, the one used here, too, was created by one of my web friends, Yuki-Inu, and I'm still very grateful for that. His appearance was mostly my idea I told Yuki, except of his hairstyle, which was completely Yuki's creation.

At FurAffinity there was a "Fursona meme" I decided to write down here, because it contains some more informations about him.

What is the name of your fursona?

Where did the name of your Fursona come from?

I had some requirements the name had to fulfill when I made the name up. It had to: 1. Sound good 2. Be easily pronounceable and leave minimum chance of errors while saying it 3. Be a "complete" name, with at least first and last/surname 4. Fit into all kinds of themes. To specify that, Bryan is and was always thought to be a person in a realistic equivalent of our modern world. But if there will ever be a picture featuring him in another theme, medieval, sci-fi or whatever, I wanted the name to fit anyway and I think it kinda works. The final name was just the combination of names I like and that fulfill all requirements. Oh, and his second name, "Dion", has nothing to do with this Celine, it's just a nice name (coming from the god Dionysus by the way).

What species is your fursona and why did you choose that species?

Tiger, Bengal Tiger to be more exactly. I chose that because I love all of those big cats and the tiger is my absolute favorite regarding this. They look strong, fast and have very cool marks (the stripes).

What color is your fursona and why? Hair/fur/eyes/etc

Why? Well, tigers are normally kind of orange with white parts and black stripes. Thus I chose to keep it that way, too. The hairstyle was not my idea as i let Yuki-Inu do as he like with that part of Bryan's body as he drew the first pic of him ever. I just decided about the colors fitting to the rest of his fur. The green eyes, well, I just love green eyes, that's it :D

What is your fursona's personality and how does this compare to your irl personality?

Regarding most parts you could say that "I am" Bryan somehow, as his character is nearly the same as mine, the only big difference is, that he loves, additional to my hobbies, every kind of sports and fitness. Well, I do like to do some sports, too, for example hockey and rugby, but I just totally suck at everything regarding fitness and strength. Except for that: If you like him, you should like me and vice versa^^

What is one item your fursona owns that is significant to you irl?

Well, there is not something that is soo important, I guess the most significant thing is, well, just his sport clothes (I do own only one sport trouser myself, but he has quite some more^^). There are not many pics or stories from him at the moment, especially not with special items, but you might get to know more about this and Bryan in general later after I try to write a little story or made up some more ideas in general.

What is one thing you think you would say to your fursona if you could meet?

First of, something like "What the fuck?!", and after realizing that it's really true maybe. "Wow, you really look cool...erm..may I hug you some time?"

What is one thing your fursona would say to you if you could meet?

"Hi there, I'm Bryan, nice to meet you" Maybe something like "WTF", too, if he should realise that I'm somehow his creator regarding the idea (Yuki-Inu actually being the creator of his first appereance)

How has your fursona changed over the years?

He hasn't changed until now as he only exists for, erm, 3-4 months ago, that was the time I've been offered an own fursona by Yuki-Inu.

Yeah, I'd like to be strong, have bigger muscles be more sportive and, most important of all, be more motivated to reach these goals.

Well, that's all for now, Bryan and I are open for any other questions or similar memes :D