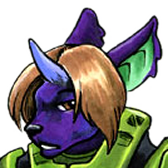 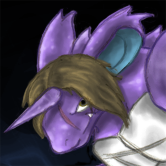 Nidonocu is a Poison-Bunny who lives in Sheffield, England. He joined WikiFur after seeing the extensive clean up needed on the ArtPlz article and couldn't resist the twitch to click edit and fix it. So he proceeded to perform a complete rewrite of that article and made it worth reading. Following that he did a large amount of early editing work, creation of templates and policing before partially retiring in late 2006. Since then he has made a few edits here and there to the wiki and would like to do more if he could remember to pay it a visit more often!

Nidonocu considers himself to be an Inclusionist with a slight lean to Mergism, regarding his wiki philosophy. He is also somewhat Eventualist.

His major work was in wiki development and he spent much of his time time importing templates, setting up wikipolicy and patrolling the Recent changes list occasionally.

His first major edit on Wikifur was ArtPlz where he did a large rewrite of the main article. His first written article (one that he started) was Northern Furs (UK), a group for which he occasionally attends fur meets for.

After his contributions during the early stages of WikiFur's development, Nidonocu was made an Administrator.

Nidonocu has been a furry since around 2002 after meeting other furs online and learning about the fandom. Though he has suspicions that for some time that he was a fur, and this could explain at least half of his childhood behaviour.

He started off taking on the form of a Nidoking-Morph, an anthropomorphic Nidoking. This is also where his name comes from; 'nido' from his species; 'nocu' short for nocuous, meaning noxious. So his actual full name is Nidonocuous. He is often referred to though as either just the first four, or last four letters of his name for short.

This form however, was originally created to be a character for a MUSH and he felt it didn't quite suite him as a personal avatar, so went ahead and created himself a more accurate creature and fursona that fitted his personality.

Thusly, his species is Poison Bunny (Animalia Chordata Mammalia Lagomorpha Leporidae Contraho Noxialis-Lagus). This is a original species that is elemental in nature and takes aspects from both real rabbits and the Pokémon species, Nidoking(#34).

The overall look is an anthropomorphic rabbit like creature with purple fur and pale purple underbelly. He retains also the green and teal colouring of his ears, though they are more rabbit shaped than those on any member of the nido-family of pokémon. He also has a small forehead horn, back-spikes, shoulder pads, and tail like that of a nidoking, but lacks the thicker body plating and flesh instead of fur. He has bright gold-brown coloured eyes and dark brown, normally messy styled, hair.

Several pictures have been drawn to date of Nidonocu and his characters.

As well as WikiFur, he also has contributed to and reads the following wiki's:

He takes part in National Novel Writing Month and has won once.

He is currently developing a MU* Client for Windows which will be released some time soon!

He also regularly role-plays at The Pokémorph MUSH and takes place in technical discussions on the forums of Neowin.net.

He also plays a lot on XBox Live (in particular, Halo 3) with his XBox 360 and on his various Nintendo consoles.