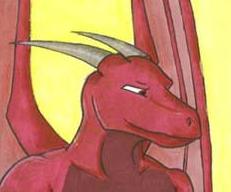 Kraken D'Waggin is a 15ft to over 10mile tall Anthro-Dragon/Raptor Hybrid, First appeared in the furry community on Lava Dome Five in 2000, still around to this day and resides on Instant Messengers, Second Life and Faibanx Muck

The name Kraken came from mixing syllables together to see what came out, in later years the name Kraken would be more of a standing reference to somthing abit more private...

His surname D'Waggin was inspired by a Chris_Sawyer picture entitled 'dwaggin', it was changed to become D'Waggin and the name stuck

Kraken has had afew mateships since he came onto the furry community, he is currently 3 years mated to a white dragoness called Shira who he has known for almost as long as he has been online