Kendareru on a road trip.

Kendall Boyer (aka Kendareru NekoSama or Leonne Pendragon) is a feline furry, who was born in Fallbrook, California on March 15, 1986 to Mary Boyer (a.k.a. FoxFyre Boii). He is a writer/artist/lyricist who currently lives in Emporia, Kansas. He has started on two stories on yiffstar, and has a band site on myspace for his family's developing band CIA: Celts In Action, and is also a co-writer for an upcoming webcomic Fur-Load of Trouble, along with his friends William Armstrong (Isamu Yan, a canine furry) and Christopher Wood (A.J. LaCrox, an Alligator scalie). The three are the founders of Fur-Load Inc.

Kendall spent most of his life (age 5-18) in Red Lodge, Montana, where he graduated in 2004 in a class of about 20 people. His fursona got it's first name in 2005 from his friend Manni-kun. He later developed the characters background, tweaking it a little over the years. He was in the US Naval service from August 2004 thru summer of 2008.

He has one sibling, Luna Boii (prounounced "Loo-nah Bwa"), an otter furry.

RANDOM FACT: Kendall has, in real life, naturally calico hair. In felines, the gene that causes calico fur is mostly found in females due to the fact that it has to be present on the part of both the last gene pair that make it XX instead of XY. When it's present in males, they tend to be sterile.

Kendall has a personality that is, in many ways, comparable to that of a kitten. His natural curiosity, obsessive compulsiveness, and inability to think before talking or taking action is both amusing and annoying. Most people find that upon first meeting him they are immediately attracted by his charm and seeming innocence, or repelled by the constant chaos and mayhem of his thoughts and personal life. He has a tendency to apologize for the smallest things, whether or not it is his fault, and tries his best to please everyone he knows, even at his own expense (psychologically, emotionally or otherwise).

His mood swings are also something to watch for. He can be your best friend one second, and want nothing to do with anything the next, like any other cat. 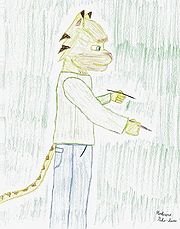 Kendareru as drawn by himself.

Rebecca is a red fox, born April 10, 1986. Her mother is a New York photographer, and he father is a Japanese sword master. Her homelife has always been traditional, due to her father's upbringing. As a young kit, she was taught in many different diciplines, including tea-house courtasy, kendo, ninjutsu, no-theatre, flower arrangement, cooking, and so on. Because of uteral cancer, she will never be able to have kits of her own.