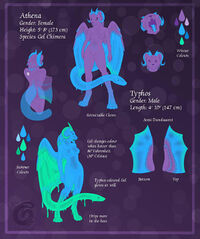 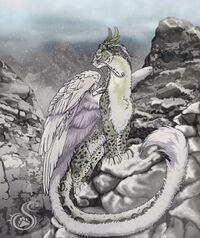 I have two main "fursonas" The first is a gel chimera named Athena & Typhos. They are my for fun fursona and the one I use mainly around the fandom. They are a chimera made up of a mountain lion body and main head, a snake tail, draconic horns and hybrid leathery/feathery wings. Both heads are sentient and independent, the lion head is named Athena, and the snake head is Typhos. Each individual freely controls the gel of their corresponding colour, they can also relax control and allow the other to take over, or can assert their will and fight for control over the other.[1]

The second is a fursona that I refer to as my "soul-sona". This fursona reflects the purest version of me as a person, and so is extremely personal and only used when representing me in my entirety. This fursona has no name, as it's name is mine. It is a hybrid of my theriotypes, snow leopard and eastern dragon. The first real artwork of this, that solidified her form, was done by Dream-Paw[2] as part of an arts/skills trade between her and I.