HoKaze no Flames, Neo Flames or just plain Flames joined the IMVU Furry Forums on the 18th of April 2008 and has been making up random quotes, RolePlaying like a madman and generally messing up the laws of reality since.

The name "HoKaze no Flames" is the name of his most used character in both novels, writings, ramblings and RPs, with whom he continually toes the line between RPing with detail and godmoding. 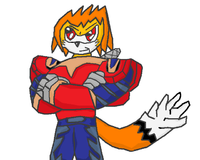 Flames first came into contact with the furry community in early 2008, amazed to find that such people existed in such a vast group. Having been entranced by Anthro art on deviantART and finding the concept of Anthros an intruiging one, he decided to gather info and later on join the fandom... Living in the UK poses a few problems for Flames' "furriness", seeing as most of the country is still unaware of the term and finding furries in RL tends to be difficult because of it, with many furries not even realising that they are furries. If he had to some up himself in one quick phrase it would probably be: "I'm not anti-social, I'm introverted..."

Flames is a fan of many forms of art, although he is most drawn to Anthro art, Anime/Manga and spritework/pixel art. He occasionally attempts to draw Anthros or random fanart, but rarely feels that his drawings are of a high standard and as a result, very few pieces of his "art" ever reach the eyes of others. He has an odd preference for MS Paint and a dislike of people who obtained either Photoshop or Paintshop illegally. Despite Paint's limitations, he is determined to prove that it is the artist and not the program that matters...