This was intended to be "official" coverage of Midwest FurFest 2007, authorized by the con staff. For various reasons (a nasty ankle injury during the con, pressure of RL work, and inexperience leading me to overweight photos vs. note-taking), I didn't manage to finish before it was no longer news. My coverage of 2005 and 2006 is a lot better! Still, I figure I should put what I have rather than let it languish on my hard drive. The photographs I took are also worth a look; many have explanatory notes. --GreenReaper(talk) 08:44, 4 October 2012 (EDT)

Schaumburg, Illinois. It's a cold November afternoon, the Thursday a week before Thanksgiving. Most hotels are deserted. Few choose to travel the week before a holiday - especially not to Chicago, where the sky is steel grey, and biting winds chase snow flurries across the parking lots.

But the lot outside the Hyatt Regency Woodfield is filling up fast. One Ford Explorer - aptly licensed "NMFURRY" - has come all the way from Albuquerque, stickers of bears and raccoons adorning its rear. A Saturn poses the question: "got skunk?"

On yet another car, a permit to the local naval training base shares the dash with a set of plush toys. The side windows are messily painted - "yiff yiff yiff", "woot MFF" and "kittah luv you". The last pane bears a single word: "Censored".

It's that time of year again. The furries are in town, and Midwest FurFest - the world's third-largest furry convention - has begun.

The doors open, and a fan passes by, dragging a large plastic container; the airtight ActionPacker, favoured by seasoned fursuiters for its durability and airtight nature.

Inside, the Hyatt's main atrium - newly accented with eeiry colour-shifting LEDs - is packed. Yet few of those present would be mistaken for the hotel's regular fare. The crowd tends young, with some clearly still in college. A few have taken the convention's "High Seas" theme to heart, adorning themselves with toy cutlasses, pistols and eye-patches - and, in one case, an air-cannon. Two pirate captains stalk the corridors - Jack Sparrow and his father.

Registration opens at 7PM, with badges flying off the printers as fast as staff can call the names (649 are printed by the end of the day). As customary, Thursday's arrivals are greeted with a sweet treat and a variety of toppings - this year, sweet mashed potato, with pitchers of Kool-Aid.

The official schedule starts on Friday; nevertheless, a combination quiz and betting game is already in progress. The question of the day? "How fast is a speeding cheetah?"

Outside, friends greet one another with smiles, laughter, and a more-than-occasional hug. Soon, the costumed characters the fandom is perhaps most famous for appear from the elevators. As antics break out in the carnival atmosphere, a pair of JAL stewardesses stand to one side with nervous grins .

The night wears on, and most of the fursuiters retreat, exhausted, to the "headless lounge" - an oasis of fans and ice water. Some seem reluctant to leave; a friendly tussle between a 'suiter and an uncostumed fur threatens to take over the corridor before a security volunteer steps in to break it up.

If the halls were bustling yesterday, they are packed today. Many events are standing-room only, including the introductory panel led by convention chairman "Linneaus" (Paul Lester), comedian "2 Gryphon" (Matthew Davis) and Anthrocon chairman "Uncle Kage" (Dr. Samuel Conway). The audience is taught the essentials - how to treat dealers, fursuiters, and each other - as well as the most important rule: six hours of sleep, two meals, and one shower. 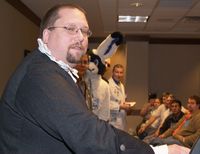 Linneaus: "...we're in the business of putting on a convention rather than ... presenting ourselves to the media."

Concern for the fandom's image is evident; a few weeks ago, locally-filmed coverage of Memphis convention Mephit FurMeet aired on CNN, accompanied by biting narration. When talking to "mundanes" the convention leaders suggest focussing on what the fandom is, rather than what it is not. As for the press, newcomers are advised to walk away without a word - preferably towards a member of staff.

They don't always get that far. Two days later, an independent reporter planning a story for the Chicago Reader tries to sneak in after being denied a press pass. Spotted at registration and tracked by security, they soon leave - without their story.

The chairman remains to conduct the next panel - an interview with the years' guests of honor; big names picked to draw attendees and lead panels. This year, there are three - artists jill0r and Erika "Chilly" Rosengarten, and writer Will Sanborn. All seem slightly bemused as an ox arrives with packages marked ACME - gifts for the guests.

Not all events are designed to draw a crowd. Several panels cover anthropomorphic art and crafts, with sessions on puppetry, suit construction and performance, and figure drawing - both human and in fursuit. Hours are devoted to spirituality, though there's no indication that furs are devoted to any particular style of belief. A talk on sexually transmitted diseases acknowledges that some are here for more than just friendly scritches.

The big shows of the day are held after 6PM; many are still at work or studying today. The evening's entertainment starts with an hour and a half from self-styled storyteller Kage, run back-to-back with the comedy of "2". Both shows play to a packed audience, with several hundred people filling the chairs, walls and floors. Devotees have heard similar lines at Anthrocon - but they're there for the show, not its content.

The entertainers are followed by an event that speaks to the off-beat nature of furry fandom: Iron Artist. Tables are hastily set up with an array of crayons, pencils and coloured sparkles. As the chairs behind them are filled, The topic? Zombie muffins.

The judges spend several minutes in deliberations before announcing three winners, though the artistic value of the pictures is debatable. The victors pose with their paw-print medals, but rest don't go home empty-handed; each keeps a miniature pirate figurine.

In the corridors, an entire wall is taken by those standing in line for the variety show - which, by custom, starts later than scheduled. The fans take the delay in good humor, chatting with those nearby, or simply watching the crowd walk by.

Some are more noticeable than others. A Caucasian youth dressed for business strolls past sporting a giant afro wig, badges conspicuous by their absence. The "Nigra" uniform marks him as an online prankster, one of the many voices of "Anonymous". Yet here, alone and unmasked, he seems harmless enough.

Watching fursuiters and puppets dance to taped music isn't for everyone. Those interested in a less rehearsed performance have dodged the queues. The audience is smaller - a shade under a hundred - but the comedy feels more personal. The two entertainers from before are here, playing up the "questions only" theme with increasingly suggestive inquiries.

Corridors are disntinctly less crowded at 9AM, when the first panels begin. One annual event is the holiday pawpet show - puppeteers performing short skits referencing Internet culture, as well as Weird Al's like "Albuquerque".

"By the way, the props we threw at you are edible. We would appreciate it if you helped us in cleaning up."

Come midday, the halls are filling with fursuits. An hour later, the walls are packed with cameras, as the fursuit parade winds its way around the hotel, before filing into a large tent outside. Even this is packed - in total, 286

A small crowd gathers in the main event hall. An hour ago, this room was a staging ground for the parade. Now, the stage is set for the convention's main fundraising event - a charity auction.

Prices range from $10 for a collection of yesterday's muffin art to hundreds of dollars, with items as varied as their price. A set of white tiger plush toys of several sizes is hotly-contested. Crude suggestions from the audience are cut short by the hammer: "We do not pass judgement here; we just want your money." 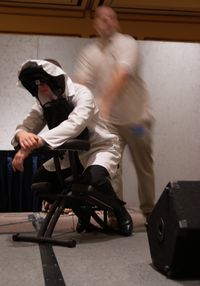 At five, the crowds start to move towards the con suite for a special event: A pizza feast, provided by "King" Elliot Ingoyama the First. The room is packed; convention gophers shout over the crowd, "Take two slices, and then get out!" The King stands regally by the empty boxes.

Event organizers seem keen to avoid cannibalism among their guests. A fourty-page restaurant guide lists over 150 dining options. For those too busy or too poor to leave the hotel, snacks are available at the con suite. Peanut butter sandwiches and soft drinks are the order of the day, though rumours persist of sushi and stir fry. These turn out to be true - over 1000 pieces were ordered.

The fursuit games include old favourites such as the hula hoop race, the limbo, and musical chairs. Cheating borders on the outrageous, but is often rewarded if the audience laughs hard enough.

Come midnight, a pack of canine fans begin to gather in the parking lot, their shadowy forms outlined by distant streetlights. First one, then others raise their heads and howl into the overcast sky. A few hang back, watching sheepishly from the sidelines.

Closer to the doorway, a loose circle of chatters is passing around what looks like a two-liter bottle of cola, but isn't. Two are fursuiters; the rest are almost as tightly wrapped against the cold night air. Nearby, another group is trying out cigars, while yet others play with a green laser.

The presentation contains a geeky brand of offbeat humor, highlighting over 20 "Heavenly" room features, including "Heavenly Grout" and "Heavenly Spackle".

Most non-locals working tomorrow have already left, catching late-night flights, or starting the long drive back home. The disco equipment is long gone, though a few gamers stay playing into the small hours. Outside, an artist sits drawing on the tables set up for the charity. A small sign . Selling commissions outside of designated areas is against convention rules; but chances are they were never members. "Ghosting the con" - turning up without registering - happens at conventions large and small.

For most, the day following the con gets off to a slow start, as the tired furs - a few seeming a little hung-over from late-night parties - are slow to rouse. Paw-adorned backpacks and tote bags lie ready as their owners mill through the corridors, clustering by seating areas while milking the precious few hours before having to leave for what is disparagingly referred to as "real life".

Badges are off. A few still have tails attached, and one lone 'suiter sits alone, perhaps wondering where all her friends have gone. Spare food and drink from parties past is distributed to all and sundry, or simply left on side tables with a note.

Some try to take it with them. As one overloaded fur leaves through the back, a spare six-pack of beer falls crashing to the ground; he hurries off, leaving someone else to clean up.

The new room rate of $115 (with tax) may force some to reconsider. But one thing seems certain As local fur Narkiel (Nathan Chamot) said at closing: "It was epic." Questions remain. Will the convention be able to find enough rooms, now and in the future? Will the staff manage to keep alcohol use within limits? But one question that seems hardly worth asking is whether this year's visitors will return.