This was my submission for the Anthrocon 2007 conbook. It's a little over a page, so I suspect it might not all make it in (if any of it does - the topic felt less compelling than last time, and I fear the writing's not quite as good), but there are several parts that could be removed without too many problems. --GreenReaper(talk) 07:05, 1 May 2007 (UTC) 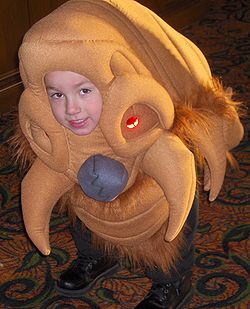 Fursuiters are getting younger...

This year marks Anthrocon's 10th anniversary - cause for celebration, given its five-fold growth since 1997. However, it also marks the 18th anniversary of something even more special: the world's first furry convention.

ConFurence 0 wasn't much to look at. Barely one-fortieth the size of last year's Anthrocon, it lost its first host, ending up at a Holiday Inn. The dealer's room was cramped; programming was squeezed into two small rooms, covering such now-familiar topics as story writing and furry costuming. The word “fursuit” wouldn't even be coined until 1993.

If it had ended there, "furry" itself might have remained a curious footnote in fandom history – the domain of a few funny animal artists who'd lost their way. But next year, attendance doubled. Special guests were invited, more programming followed, and the event blossomed.

Experience taught hard lessons over the years; thanks to one, ConFurence is now just a memory. Still, something special started eighteen years ago in Costa Mesa, and its legacy will last a lifetime.

What are we seeing as furry fandom comes of age? More and bigger conventions, for a start. In the last five years, the largest events grew by 50% or more. Furry Weekend Atlanta was just an idea in 2003, yet hosted 762 furs in February. Sadly, Conifur was discontinued in 2006 – but two events sprung up in its place.

The fandom is spreading across the globe. Over a third of the top fifty furry events are held overseas. They aren't quite on Anthrocon's scale – most cater to 200 fans or less – but they make up for it in character. There's a riverboat party in London, and a camp-out planned for Brazil. Last, but not least, Eurofurence has finally outgrown their castle – so they're setting up a casino instead.

All this growth means more media attention. Sometimes the coverage won't be so positive. Don't let this get you down – even CSI brought good people into the fandom. Just be friendly but cautious when they come bearing cameras. If in doubt, “no comment” is always an acceptable answer!

The ways we celebrate anthropomorphics are changing, too. On Second Life, 3D avatars twirl tails in the virtual dawn – though MUCKs still hold the edge in roleplay. Furry art, previously a rare resource swapped between fellow artists, is now shared with a click of a button - rendering most paper APAs and fanzines obsolete. Fursuits – once the domain of the determined amateur – can be commissioned from a multitude of designers, whose work with foam and fur make early attempts look quaint by comparison.

Hopefully such commercial development and ease of distribution will spark further creativity, rather than dividing us into producers and consumers. I believe it's a spark worth cherishing – and sharing.

You can help. If you've been around a while, have a good look at the people who are joining the fandom, and take some under your wing. Don't be put off by the enthusiasm of youth – you, too, were like that once. Working together, you just might create the next big thing.

And if you're new to furry? Get involved! Those who put the most into fandom get the most out. There's plenty to choose from, no matter where your skills lie. The panels here are a great way to pick things up – and with a little effort, it could be you behind the podium next year.

Just remember: it's not huge conventions or fancy costumes that make furry fandom great. It's regular people taking time to share something special with their friends. And that's one future we can all look forward to.