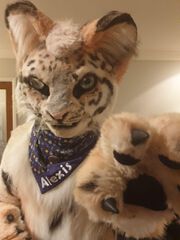 Alexis discoverable on Telegram as @FurrySnowLeopard, (born February 10, 1970 in Derby, England), is a male fursuiter who lives mostly near Frankfurt (Germany) and occasionally in Chorley (in the United Kingdom), previously having lived and worked in Zürich (Switzerland) for many years. Not necessarily by choice, but as fate would have it gets to work in both countries, therefore doesn't really have much of a home anywhere as yet :-)

He is in Software Testing & QA, has 3 kids, 1 daft sprocker spaniel, plays in a ex PBEM game called Dungeonworld [1] for the last 20 odd years, claims to run a Guild for Centaurs and other furry creatures and then has been flying between England (his home) and Germany (his other home) for several years.

Alexis thinks he probably officially joined the fandom in March 2019 when he commissioned his very soft and floofy suit to be created by Mipsy of Furry Tailor and then registered to join the Luzern/ Lucerne fursuit walk, but really had been a closet furry for several years already after seeing (& getting a hug from) a Snow Leopard fursuiter called Sora at Basel Comicon in 2017. Many fursuit walks then happened between then and Furcation and NordicFuzzCon 2020 the start of the dreaded Covid-19 epidemic in March 2020 when everything furry & his job (in Switzerland), indeed everything pretty much came to a grinding halt.

Twelve gruelling months of unemployment later in April 2021, Alexis was happy to be recruited by a fellow Furry Tailor black panther fursuiter and moved to Frankfurt to take up work. This was important and allows Alexis to travel widely across Europe to randomly scritch hundreds more people, but also offer them the all-important fluffy hug.

Alexis's fursona, is a summer coloured Snow Leopard (black, white, peachy shading). His personality is friendly, cuddly and occasionally mischievous. Has been know to chase Red Pandas around NFC 2020, commonly introduces himself by randomly scritching people with very floofy paws, adding a floofy V symbol above other furs heads and occasionally pouncing on unsuspecting furs swamping them in deep fur....

Alexis can be found threatening Snow Leopard scritches and furhugs to anyone lucky/ unlucky enough to come within range.


He even attempts to scritch National news photographers...

At the end of March 2022 the snep acquired a Grey Wolf "SnowWulf" created by Inerri of Inerri Creatures based in Normandy, France. Nothing much changed though, it's just a snep in wolf's clothing, earning him occasionally the nickname of "Sneppiewolf" :-)