From WikiFur, the furry encyclopedia.
< User:DuncanDaHusky
Jump to: navigation, search

This page is a personal article, and may not conform to WikiFur's standards for tone or neutral writing. As a courtesy, please contact the author, DuncanDaHusky, if you wish to make major changes.

And now with the charts and the tables and the statistics and oy!

Let's start out with the raw numbers, shall we?

There's a couple of items of note here. First off, the staff numbers seem to fluctuate a bit; this is because for MFF sometimes the line between staff and volunteer can be a bit blurry. Some years we're good at defining who's in what role, some years we're not. Our sponsor rate is also not as good as I would have hoped, falling off slightly. I suspect this will continue to go down next year since we are raising the price for a sponsorship from $100 to $120. The last time we raised the sponsorship rate was in 2003, and you see what happened to the sponsorship rate then. Unfortunately, it's the only way we can continue to make sponsorships economically feasible. The last item of note is that, despite a late start for online registration, our pre-registration rate went up for the first time since 2001. While I would still like to see that higher than 60%, I'll take the modest increase as well.

This table also shows that we are maintaining a nice, steady rate of growth. As a matter of fact, if you plot the attendance by year, you'll find that it's nearly linear (R2=0.9841), with an additional 126 people per year. 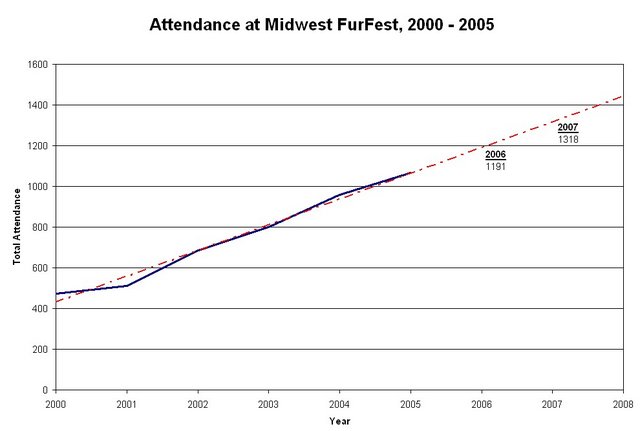 As shown on the chart above, this would mean that a reasonable estimate for next year would be around 1190 attendees. This is a nice, moderate growth rate, and one that is much easier to prepare for than a sudden 30% growth rate (see also: MFF 2002).

As usual, we had a huge crush of people registering on Thursday night. As I mentioned earlier, at our peak (around 6:40 PM) we were registering one person every 19.4 seconds. Even though we started out with two printers (and dropped to one on Friday due to hardware issues), the printers were definitely the choke point in the process. We had to do many more badge reprints this year due to printer failures, and this really slowed down the time it took to actually put the badge into an attendee's hand (which is not reflected in the data, since that just tracks when the print request was made). 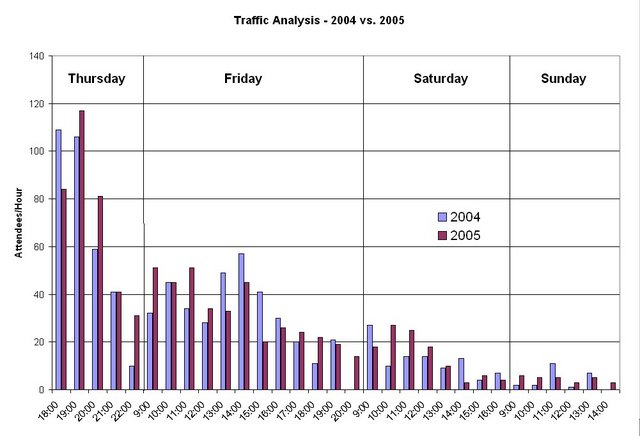 It is notable that this year it appears that many people arrived slightly later on Thursday night, but by the end of the evening about the same percentage of the total convention attendance had registered as at the same time last year. 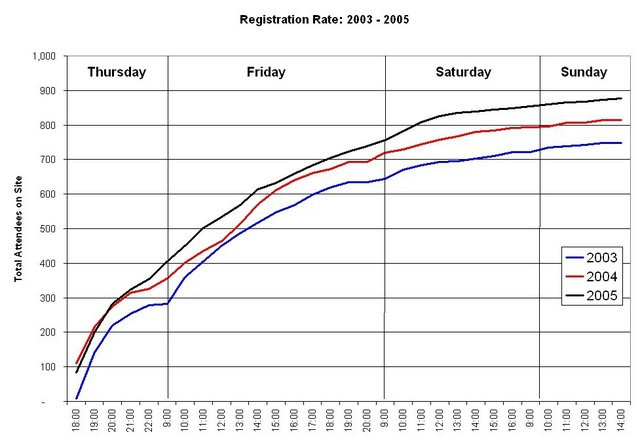 Once again, we are faced with the fact that about a third of the convention is registering on Thursday night. I think it would be good if we could provide them with more to do - something to consider for next year.

Let's take a look at the geographic distribution of our attendees:

What we see here is a moderate resurgence in Midwestern attendance, with a drop in Northeast and West Coast attendance. Keep in mind, these are percentages, so that do not constitute a decrease in numbers from those regions, but that more "locals" came to MFF this year. From what I saw anecdotally at Registration, we are starting to pull in folks from outside of furry fandom: the curious, the folks from other fandoms who want to check us out, and on, at least one occasion, a waitress from the Olive Garden across the street wanting to see what all those strange people were doing over in the Hyatt :-) It is also notable that even though they account for a small percentage of our attendance, this year Midwest FurFest was pleased to welcome folks from Australia, France, Germany, the Czech Republic, Denmark, and Sweden. Slowly but surely, we're going global!

This concludes my wrap-up of the Registration Department for Midwest FurFest 2005.