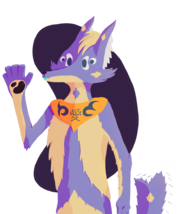 The Extrolf [X-tur-olf] (plural: Extroli [X-tur-o-lee]) is loosly based off an alien-wolf-dragon hybrid and was created by Brutanian in May 9, 2019, and it's first known appearance was from his fursona, "Eirian".

The species is from the Galaxy EGS-zs8-1, but the specific origin within that Galaxy is unknown to this day. Ever since the first contact with Extroli they have been known for their fairness and intelligence. Their first touchdown location on Earth was in Japan at 30.436424 130.245940 on Kuchinoerabu Island, where the Extroli lived on that island for 50 years in secrecy with the natives, so gained a fond liking of the Japanese Language and still use it as their main writing/reading language, even though due to their natural intelligence are hyperpolyglots and talk all languages, Interestingly enough they don't use a Sound based communication system they use a Visual and Mental form of communicating consisting of hand motions and basic neural transmission.

Head
The Head is comparable to a dragon's; with extended back cheekbones and a longer and more flowing shape compared to a standard wolf. The Ears are extremely unique as they face and curve backward and with a Fan-like feather structure, which extends to their neck, used to detect minor vibrations. The Eyes on the Extroli are 'Different' to say the least as they have four eyes, which consist of two main Eyes used for a forward and minimal side view and two Sub-eyes which aren't used most the time but serve as a defense against surprises of any kind.