Blaze Tiger a.k.a. Blazger is 24-year-old male fur who used to reside in the Chicago suburb of Oak Lawn. He currently lives in the Northern part of Illinois in the town of Round Lake Park. He is mated to the clever and playful Frostcat. His fursona is that of a reverse tiger (or in other terms a Black Tiger) with black fur with orange stripes and has a flame on the end of his tailtip. 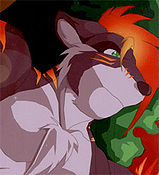 Blaze and His Local Furends[edit]

He is a very playful, charming, friendly, caring, helpful, cuddly, and all in all a wonderful furson. He can be seen at local Lake Area Furry Friends meets including LAFF Bowling and SliderCon. He is also an active member of SecondLife and helps moderate the SL LAFF community along with Sema JayHawk and Steel the Warrior. He also helped out at the LAFFNYE party with food preperations. At some point this year he will also help out yet again for the next coming year.

He was a staff member at Midwest Furfest 2006 and plans to be a staff member in 2007 as well. It was at that con that he debuted his first fursuit, which was of his fursona. This suit (made by Lacy) is his only fursuit to date, but he plans on having more commissioned in the future. 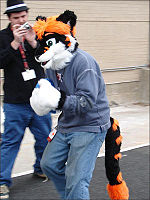 Blaze has been to Midwest Furfest 2005 and 2006 as well as Anthrocon 2006. In 2007 he plans on attending Further Confusion, Anthrocon and Midwest FurFest.

On the mind of the Tiger - Blazger's LiveJournal