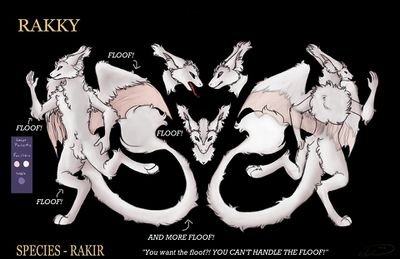 The Rakir (Ruh-keer), created by Zakdarak, is a fictitious species of its own accord, and is meant to have no genetic or cultural relations to any other.

Known now as the "floofiest" of anthropomorphic species,[citation needed] inviting one over would usually be accompanied by wrapping one's furniture in Teflon. The actual historic past of rakir (rakir is plural for rakir),[clarify] is up for much debate due to the fact that they seem to scatter and evolve almost seperately, in some particular cases, so much so that breeding can no longer physically take place between certain "tribes". This would technically define these as new species, but the Genus would be the same.

It is a mostly fur-covered creature with the only exception being its lower portions of the wings, which is for the most part a type of aerodynamic webbing. The wings are in fact retractable, quite like the claws of feline species. The internal organs of the rakir are closer to the ventral side than those of other species, in order to accommodate for the wings which fold into the back. Obviously in order to accomplish such a feat, the wings are incredibly flexible, yet strong enough to maintain flight. Rakir only make short flights when necessary, however, the wings are rarely used if at all in common rakir life. The rakir usually take great pride in the massive amount of hair that falls to or past their shoulders, and take great measures to take extensive care of it. It's one of their ways to show their age or lifestyle, which can be done by dying, styling, etc.

You'll find a significantly different anomaly found in the creature to the be the circular spiral of fur just around its higher back/shoulders, this is what's known anatomically as its orbit. The orbit is a thin spiral of fur that may move, stand, or sway according to certain emotions or feelings, generally it lays flat when relaxed/unexcited or sad/embarrassed and it will extend to a stand of some sort when happy/joyful or scared/frightened. The orbit is in no way under the control of the creature, and reacts involuntarily.

Its snout is unique in shape and function, and are known to have a great sense of smell. What makes the olfactory senses of a rakir to be indistinguishable to other species is the location of the nasal passages and the way they twine within the snout itself. They do so in order to increase the sense of smell's effectiveness. Scents are a very ritualistic and necessary thing to rakir. Many, if not most, incense, candles, colognes, and other olfactory pleasing products are produced or designed by rakir.

The ears are large and quite furry, simply put, and usually end in tufts. As for the inside, the inner walls of the ear are much less fur-covered than the average animal. This is due to the fact that less is needed when most of the ear is covered on the outside to begin with. Even so, their hearing is a bit above average. A rakir's eyesight is not anything to be proud of, but for the life they live, it suits them well enough.

Their eyesight can see all colors within the visible light spectrum, but their perceptive saturation is far above average. This leads to a great deal of rakir being colorblind or color confused, and the optometry departments could all agree that rakir have a bit of evolving to do when it comes to seeing. This has been hypothesized by, take a guess, many rakir and the hypothesis include that the evolutionary past of rakir may be from a darker region, presumably, cave living.

A rakir's tail is long, most times about 3/4 to an entire length of the body of the creature, and though it begins thick at the base, is thin and tuft-tipped at the base. The tail is under complete control of the carrier, its many nerves make for astounding maneuverability and sensitivity as well. It is yet another one of the physical structures they take great care of, more so because their tail "needs" more attention, being so long and, in many cases, burdening.

An odd, yet common case among the species is an obsession of sorts with its own tail, some talk to it, some hug it, and some attempt coitus with it... obviously the latter is least common, but therapists have seen it before.

Color in the race is an odd mix of choice and genetics, as most rakir would admit to dying their fur because they were born with a palette they could have done without, or even abhorred. Coloring of the fur upon birth will be one of two things, Solid, hereditary, bi-dominant colorization, like most common house cats. OR they can be splotchy, the color spreading with growth. In many cases the spreading colors will mix, swirl, and create many a blotch of assorted colors. This is less common than the former, however.

The species are known for their physiological ideals and many well-known philosophers are of rakir decent. Their intellect is not too far above average, but they live by the "roman question" of "why?" and will not hesitate to ask it.

Open minded and curious, they seek the oppurtunity to ask it. There are no religions known to be followed by rakir in general, but few tribes of isolated rakir have been found and it's been shown that they followed a certain set of codes, almost as if religiously.

Due to the major separation to the many groups of rakir, stereotyping them is hard. Written material under the names of rakir are higher in proportion than most in relation to philosophy and research, emphasizing their interests in certain controversial ideals.