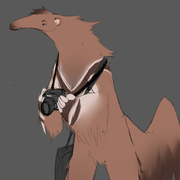 A little about me: I'm a programmer by profession and hobby. My job is multimedia developer, mostly dealing with web languages, but my passion is game development. I also have a healthy interest (obsession, actually) with entomology. I love studying bugs and chasing after them with my camera. and will bore you to tears with my knowledge if given the chance. This interest has led to me purchasing a a dSLR and macro lens, so I've added photography to my list of hobbies. And yes, I do partake in entomophagy whenever possible. I'm an avid gamer, I write and draw when the mood strikes me, and I love terrible B-movies. :=~

I wasn't always an anteater; following a seclusionary period and a sort of mini existential crisis, I felt the need to reinvent myself, both within and outside the furry community. (Rumors of my having abandoned said community are greatly exaggerated.) Given my passion for invertebrates, and my general feelings of persistent awkwardness, I settled on giant anteater. I'm not therian, nor do I have any ideas of actually being an anteater in some way, but it feels like a very natural fit for me, and I'll often refer to myself as an anteater to other furs. I'm currently working on an anteater fursuit, as well. I've temporarily used Ucara, an anteater trickster God from Amazonian mythology, and Dali, for the infamous artist who kept an anteater as a pet, as fursona names; however, only Antnommer seems to have stuck.

I often use :=~ as a "silly" emoticon and signature trademark. It's supposed to be an anteater face with the tongue sticking out.

While I'm not an entomologist, I did have ambitions of becoming a forensic entomologist, but I was terrible at chemistry so I switched to programming as a career. My passion for bugs stuck with me, and over the years I've learned a lot about them. I don't collect and pin bugs, though I have nothing against those who do. I prefer to take photos and video, as their behavior is often just as fascinating as their morphology. I've recently become interested in entomophagy, the consumption of insects (and arachnids) as food. I've eaten a variety of insects, and have supported entomophagic campaigns such as Chapul, Little Herds, and Six Foods. I'm most active on Twitter, where I often share other tweets of bug photos and articles.

My primary subjects for photography are animals and fursuiters, the latter of which you can see on my Weasyl and FurAffinity accounts. I currently use a Canon Rebel T3i with an EF-S 60mm f/2.8 macro USM lens and a ring flash, and process my photos in Adobe Lightroom.

I have an associate's in Computer Information Systems and a bachelor's in Game Development & Design. Over the years I've learned various programming and scripting languages, particularly ActionScript 3, HTML5 (and whatever nonsense goes with it), and C#. Game development has always been my primary focus, and I've built game projects in Unity3D, Unreal Engine 2004 and 3, Source Engine, Citrus Engine, and Flixel. Currently I'm working on porting old projects to the Ouya gaming console. To pay the bills, however, I do multimedia development. I've worked on e-Learning and web projects for well-known tech and education companies.