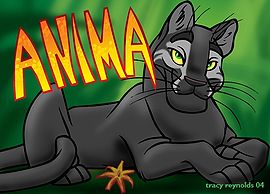 Anima, or Animakitty to avoid confusion, plays a twenty-foot long quadrupedal black panther on FurryMUCK, Tapestries, SPR, and Voregotten Realms among other places.

Some of the more popular stories include the Vixen series and the two "Burgeoning Desires" balloon vixen tales.

The oversized panther's player lives in the Dayton Ohio area in the United States, working as a computer hardware technician and writing in his free time.