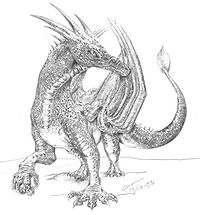 IrWin is a black hermaphroditic dragon character. It's the roleplaying fursona of Peter Markusson, living in Gothenburg, Sweden.

IrWin is a size-shifter, ranging from a 2 foot long firelizard up to anything like a dragon. Sie's got wings and can fly. Hir body is mostly covered by smooth, black skin, but with patches of scales of varying size. Hir hide is filled by scars, blamed on weapons fired by humans. Mostly, sie can be seen as a 6-foot anthropomorphic bipedal dragon, or a 80-foot high quadruped dragon.

Sie hails from the world of Skye that exists in what sie refers to as "one facet of the Omniverse". The dragon is a former ruler, a refugee from a war with humans.

Sie is known as Irwin Blachere on Second Life where sie among other things have taught roleplay at the Gianfar sim.