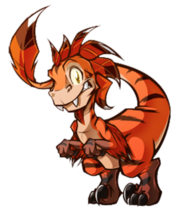 Furry Unlocked, originally called Unthrocon, was a yearly furry convention which takes place in Salt Lake City, Utah, USA at the Salt Lake City Radisson Hotel. It first occurred in 2013, though there was a "one day event" by the same name in 2012.[1] This event was used to judge how much local interest existed in a regional convention.

Furry Unlocked's mascot is Roki, a Utahraptor chosen because of its discovery in Utah.[2] The name Roki won a contest.

The convention had a strong game-oriented focus, with two game rooms. Top tier convention swag included a personalized dice bag[4] and a full set of role-playing dice. An extensive library of games could be checked out by attendees during the convention.[5] Some games were modified to fit better with the furry fandom, such as a custom Twister mat for a fursuit twister contest.

Unthrocon had a number of events and panels in 2013.[6] The tournaments had prizes for the winners.

In 2013, the convention's board of directors were:

In January, 2015, it was announced that Unthrocon would be changing its name to Furry Unlocked.[13][14]

On December 13, 2015, the con board of directors voted in favor of ceasing operations of Furry Unlocked, in part due to an inability to locate eligible people to continue running the convention.[18]