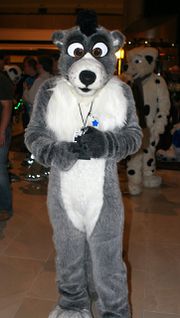 UnoOtter is a fursuiter and furry lifestyler who lives in Vancouver, British Columbia, Canada. His fursona is a Ridgeback Otter. Originally from California, USA, Uno has been a part of the fandom since 2006; only becoming active in the community after moving to Vancouver and attending local fursuit gatherings in 2011. Since his initial introduction to fursuiting, Uno has become a regular attendee at the local pacific northwest conventions and meet ups.

In 2011, he joined the RainFurrest staff under fursuit lounge maintenance, and has since taken on the position of Fursuit Programming 2nd for 2013 and 2014. He has also held volunteer positions for VancouFur.

Uno's fursuit character, depicting his fursona, debuted at RainFurrest 2012 and is a collaborative result between himself and others. The suit is always going under minor modifications and may appear slightly different in pictures over the years. As of March, 2014, the suit has "toony" rather than "follow me" eyes.

In real life, Uno is an electrical apprentice. In his free time he enjoys cooking/baking, hiking, snowboarding, crafting, photography, traveling, and coffee.