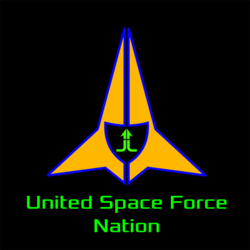 The United Space Force is a small furry community of furry Second Life inventors and innovators who united for the better cause of Second Life and created many scripts and games.

Today Star serves as part of their region's security and comic relief bot.

The United Space Force also has a large OpenSimulator grid called Aries which was used for experimental scripting, and building that could not be accomplished with the limitations of Second Life at the time.

The group started on the MMOSG Furcadia in 2004, before moving to Second Life in 2006, On December 17th 2015, the Second Life group and community abruptly shutdown.

On August 2019 the community opened back up as a Furry playbox region where visitors may play with vehicles, aircraft and other toys.

A mad doctor by the name of Dr. Stranderbarugher sent ships away to populate several other planets in other galaxies to cultivate the new born species that was to succeed the human race.

the storyline is very poorly documented and only told between the members of the community by hearsay.