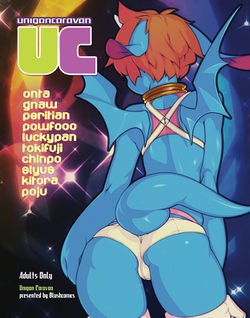 Unigan Caravan is a crowdfunded adults only, gay themed comic produced by HardBlush founder and artist Onta under the BlushComics label.

Unigan Caravan is a 70+ page collection of illustrated lore and stories about the unigan, a fantasy species of winged, dragon-like creatures created by Onta, with an affinity for getting into all manner of antics (mostly sexual), as drawn in comic or pin-up format by various known furry artists.

The main repeating character throughout the book is Devin, Onta's own unigan character.

In September 2012, Onta launched a project on Offbeatr,[1] the fetish crowdfunding website, for an adult, gay collaborative "one shot" comic book of his fantasy species, the unigans.

The project quickly achieved and surpassed its $5,000 funding goal, reaching a grand total of $8,227 at the project's end in October 2012.

Rewards for support ranged from a digital and/or physical copy of the final comic, plus a HardBlush account (three months to Lifetime), printed donor name credit, or a donor's own character or unigan version pin-up drawn with Devin.